A bit of this and that!

This waterfall ran for a week fourteen years ago. I shot a number of images on February 14, 2008. I went back with a friend the next day after the sun came out. We had fun scrambling over the rocks. It was unusual that the temps reached 60º F that day. The snow melted and I was told by a BLM ranger that a small dam had broken above the falls. He said that the previous time he saw it flowing anywhere near to this force was twenty-six years earlier. It was a sight to behold. (Click to enlarge images).

I delved into the archives for this one. The tree held on for quite a while. It’s gone now. Of course, Cerro Pedernal is still looming large over the surrounding landscape. I shot this from the Rio Chama river road to the Desert Monastery.

Sitting in the same folder as the image above was this image from long ago. I think I recall the plant in a pot my daughter had on a windowsill.

It snowed a couple of times in the last month, so I got out and looked for an appropriate location. This building is in Costilla, New Mexico on the Colorado State Line.

Snow-capped Yarrow plant in the garden. All the yarrow lost their caps in the warm weather over the last couple of days. It was a pretty sight while it lasted.

One of my favorite portraits shot on Kodachrome 64, scanned and converted to black and white. I shot this on Christmas day at Taos Pueblo during the Matachines dance in the late 1980s.

I have a lot of fun making these blog posts. I hope you enjoy them. Thank you for all the comments and compliments. I really appreciate it. As always, thank you for looking. G

It’s been all go for the last month with tours. I have a few more tours coming up and then a short break for a couple of days following up on some personal work. I’m grateful for the photography tours and workshops and the wonderful photography clients I get to work with.

In the first two photos, I got up and out early to shoot the moon setting. Well, it set, right into a big bank of fog. So I shot the fog lifting in the Arroyo Hondo Valley just south of where I intended to catch the moon. Fog is a rare occurrence in this area, but we’ve had so much rain recently that it was only a matter of time until it filled the valleys.

In the following shot, I sat out on the deck waiting for the nearly full moon to appear from behind Taos Mountain. When it did, it had a pinkish hue to it from the fire smoke in the atmosphere. It was still beautiful nonetheless.

The cloud below formed very quickly and filled the sky from Taos to the west of the Rio Grande Gorge. I had to shoot three frames and stitch them together to capture the immense size. I liked the corkscrew-looking form. I’d not seen one like it before.

Lastly, a fun panorama shot at the Rio Chama overlook in Abiquiu with William, a client on a cross-country road trip who stopped in Taos and joined me for a three-day photo tour.

Rio Chama with the reddish rock butte, Cerrito Blanco in Abiquiu, New Mexico. Popped over to Abiquiu yesterday to scout some locations for night sky photography. We pulled over at this spot where the river is full (they released water from the dam) and always muddy. This favorite location on my photo tours was lush and fresh. I made this three image vertically stitched panorama on my iPhone. Then it rained heavy. I should have worn my wellies. Stay tuned, I’ll be back with the results from the night sky shoot after the new moon in a couple of weeks. Thanks for looking. G 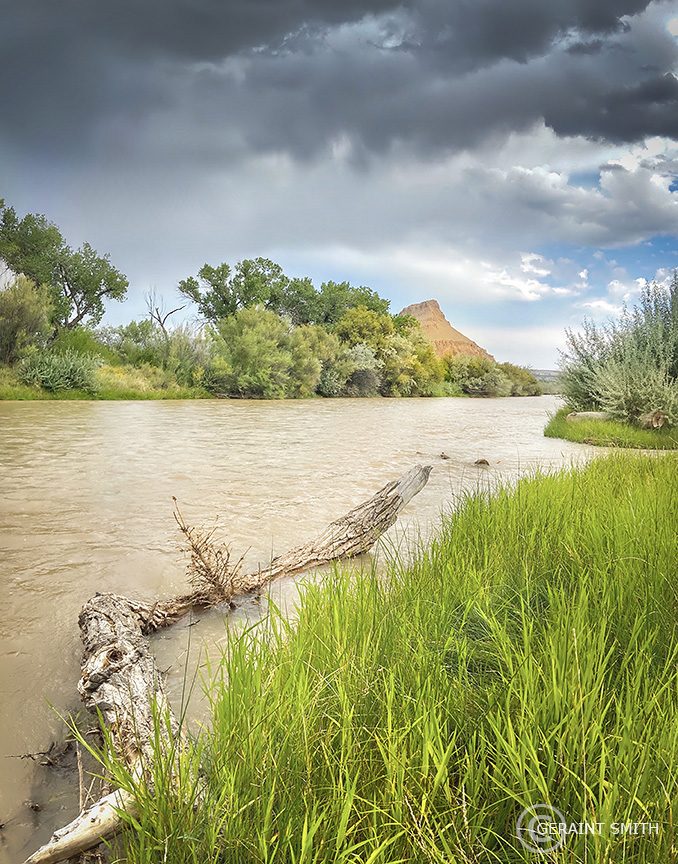 Rio Chama overlook, in Abiquiu, NM. Lets stay in this area one more day. It’s greening up in northern New Mexico. It’s not looking quite like this just yet but it’s getting there. That means spring is here and that’s a good thing. I can feel the days warming up, with milder evenings where the wind has second thoughts. This place on the Rio Chama is a favorite stop on many photo tours. You can see why. Thanks for looking. G

March along the Rio Chama in Abiquiu, New Mexico. During this self imposed quarantine I’m touring the archives. I’m going slow, pedaling my virtual bicycle, savoring moments in images made over the last few years. Today, outside the kitchen window there were clouds and sunny skies much like this day from two years ago in Abiquiu. Be safe and please stay well. Thanks for looking. Geraint. 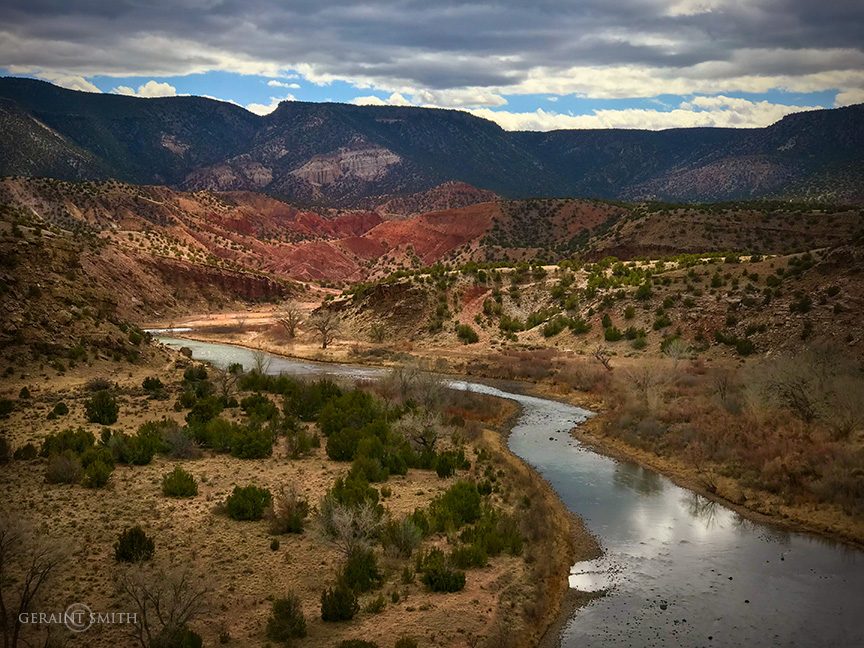 Rio Chama Bosque, Cerrito Blanco, Abiquiu, NM. In the bosque (woods) along the Rio Chama. It’s a beautiful location and I feel unencumbered, yet cloistered by the arching trees. Their branches bend and bow in all directions, creating a natural cathedral like feeling. Hmm… think I’ll stay here awhile. I made this image on December 29, 2017. It doesn’t look like it but it was quite cold this day, but not as cold as it’s going to be here in San Cristobal on December 29, 2019. We’re expecting -2º rising to about 22º for a high. Brrrr! Thanks for looking. Stay warm wherever you are. G 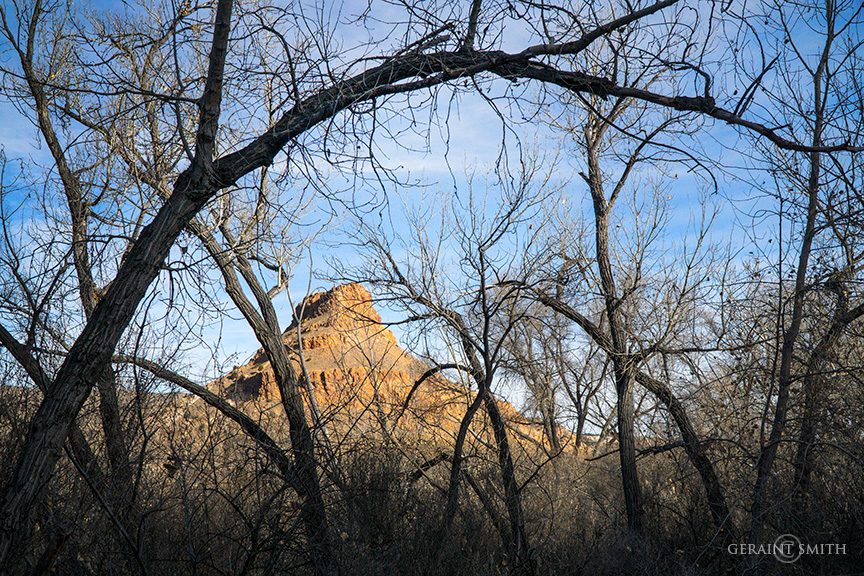 Rio Chama road, off the beaten path in Abiquiu, New Mexico. A quick trip to the red and honey colored rock country in the Chama River Canyon yesterday. The temps were in the mid nineties, exceedingly hot and dry! It was great fun to spend time with my son, listening to his story telling, surrounded by gorgeous scenery and good company. Thanks for looking. G 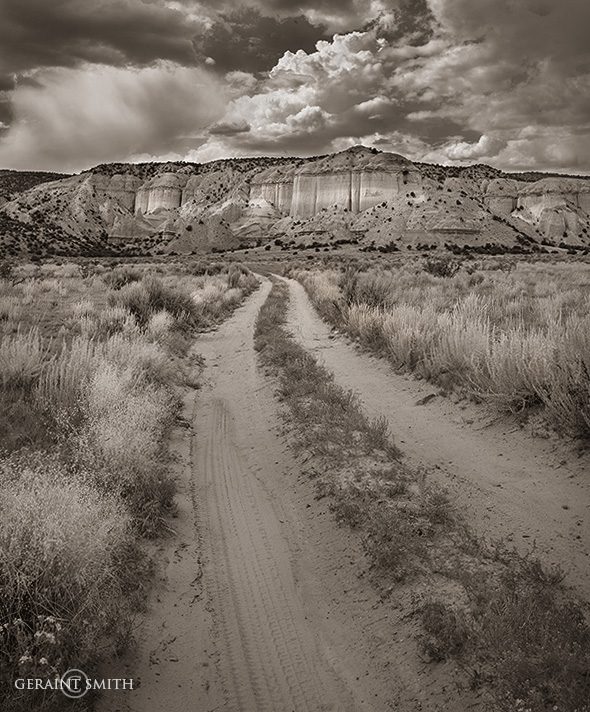 Cerrito Blanco, Abiquiu, New Mexico. A view from the banks of the Rio Chama, and to the south, the Village of Abiquiu. Proximity is the watch word in this area. There are many locations to visit within a short distance of each other in this neighborhood. Join me on a photo tour and I’ll introduce you to some gorgeous landscape opportunities. Thanks for looking. G 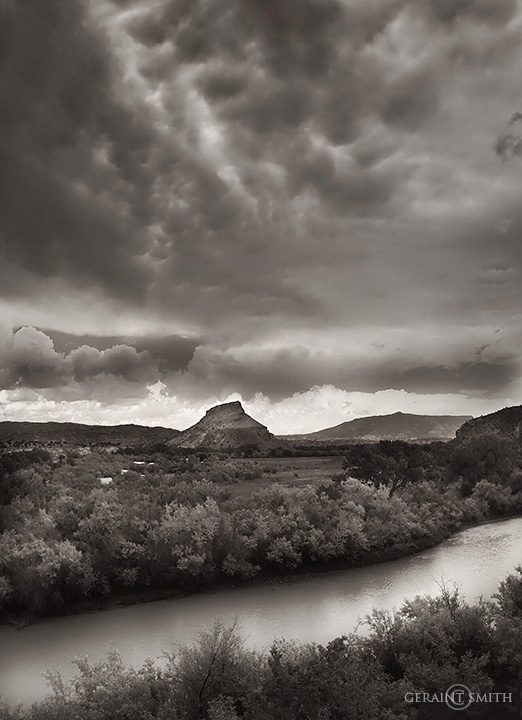 Cliffs Along The Rio Chama

Cliffs along the Rio Chama on the road to the Desert Monastery. For sure the tree adds a little scale. In color these cliffs are hues of honey, rosy pinks and rusty browns. There’s a wonderful old “David Bramley” windmill behind where I’m standing. Below are some links to other images in the area. Thanks for looking. G 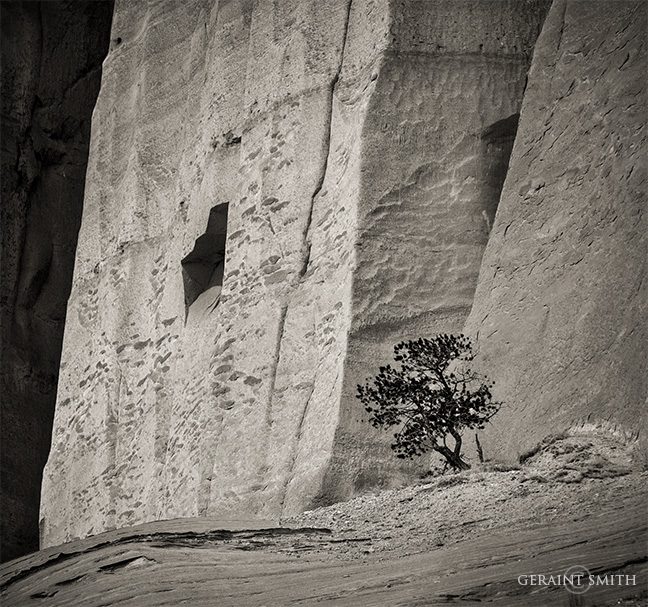 Adobe walls, La Santa Rosa de Lima on the banks of the Rio Chama, Abiquiu. Someone, during the last week or so, had reassembled the rotting old wood cross that was replaced a few years ago and left laying in the cholla cactus near by. Yesterday we met a lady, a member of the parish, who had planted young rose bushes. There are bottles of water stored next to the building, labeled, “Please use to water rose bushes”. I told her I would water them when I visit again next week. She was grateful. Thanks for looking. G 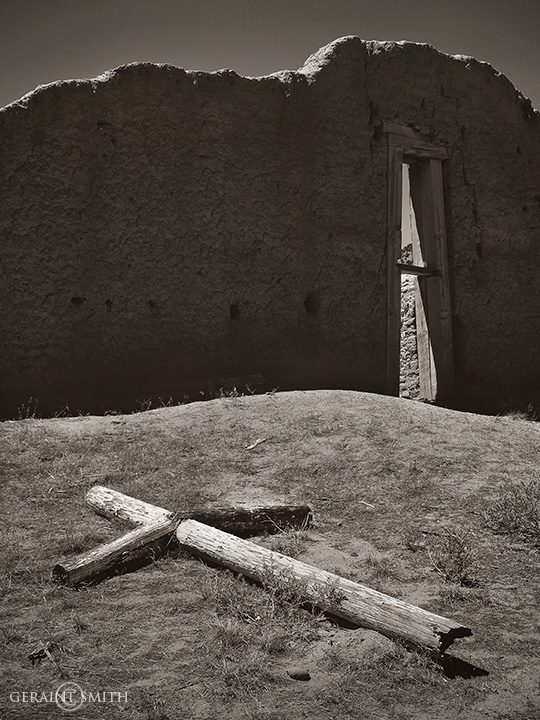 Here are a couple of images made on previous visits.