Morning clouds yesterday over the Sangre de Cristo, (Rocky Mountains) from the dining room window. I love my views from the various rooms in the house. I saw a goldfish endeavoring to escape the fishbowl. You?

The high winds morphed the clouds rapidly into a badger! I’m sorry but I often see badgers in the clouds. All and any interpretations are welcome here!

If you are interested here’s an interpretation of Badger Totem.

The following image is the snow-capped Virsylvia Peak in the Latir Peaks Wilderness. Not from the dining room window but a short drive north to the Colorado state line.

A familiar sight on the drive to Taos, a Red-tailed Hawk in its usual place. This power pole or at other times a treetop across the street offers this raptor a view of what I suspect is a choice hunting spot. It’s gratifying to see the same bird day in and day out. I would miss this creature if it wasn’t there.

Not a spectacular photo but I photograph what I see and like. I found this figure under my car in downtown Taos. I liked it so I’m posting it. At first, I thought it was a Lego® figure, no, but it was definitely a flattened figure becoming one with the road.

Coming up next Monday is the “Wolf Moon”. Here are five sequential images of last year’s Wolf Moon rising over Vallecito Peak from Arroyo Hondo, NM. I wish now I’d turned on the video camera. Maybe I’ll do that with next Monday’s upcoming Wolf Moon.

As always, thanks for looking. Have a great week. G

Road trip to Alamosa for covid shots. No matter the reason for the trip, there’s always something to see. On this occasion a very large storm cell moving through the Central San Luis Valley carrying spitting kernels of snow. Standing up in the bed of the truck was stinging but exhilarating, to say the least. It didn’t stop me. We stopped into other locations as well for the black and white below. There are 14,000 ft peaks in this range behind those clouds.

Following are a few pictures from one of the five photo tours/workshops during the last month. I’m booking tours/workshops from June through the rest of the year and beyond. Let me know if you want to join me on the road in northern New Mexico and southern Colorado.

Thanks for looking. Stay healthy. See you next week. G

Raven flight with Three Peaks, also known as Tres Orejas, and the sunset. I was waiting for the crescent moon when a couple of ravens flew by. I got the second one nicely placed. Thanks for looking. G 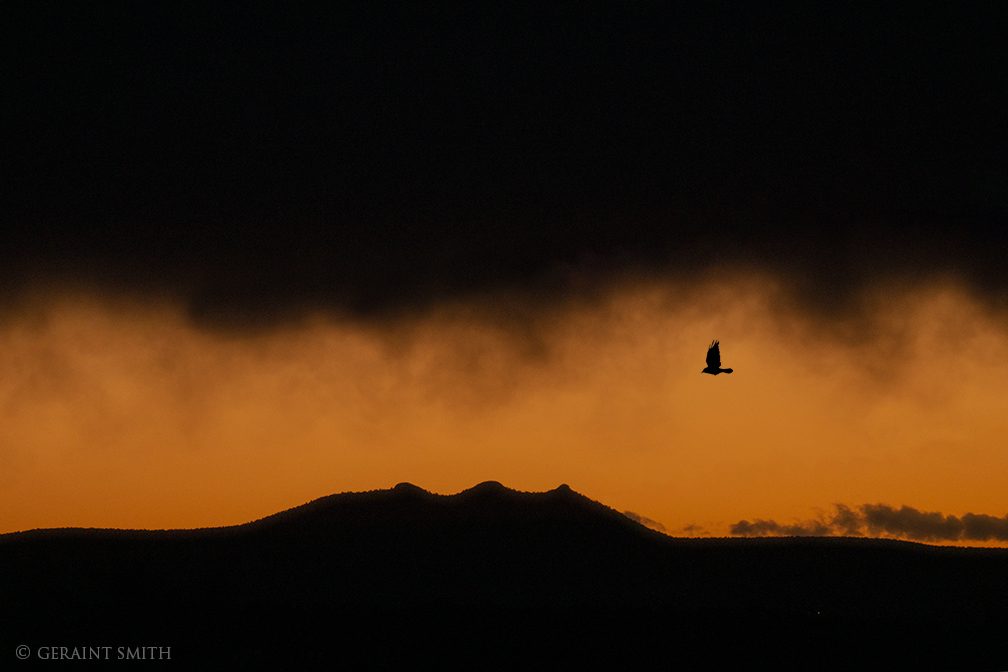 Wave, surf, clouds, dawn with Taos Mountain, NM. The correct name of these fascinating cloud forms is Kelvin-Helmholtz clouds. Here’s the scoop from earthsky.org. Looks warm, doesn’t it? I won’t be getting up this early again for some time. At 9º this morning I think I’ll crawl into my bear den and come out in the spring.  Thanks for looking. G 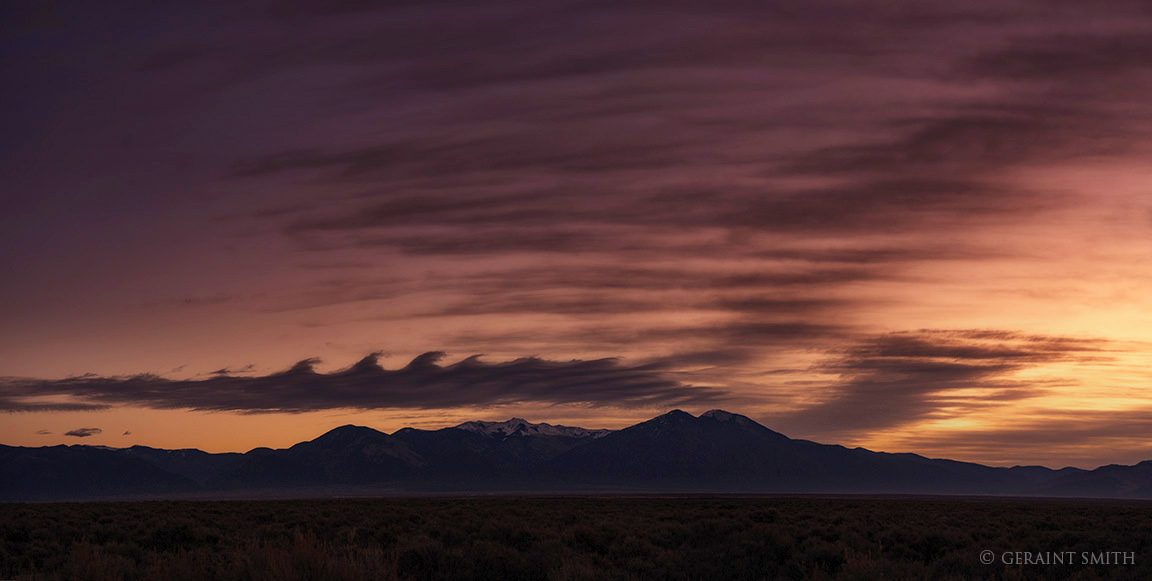 Big cloud over Ute Mountain, New Mexico. Ute Mountain, like its companion, San Antonio Mountain create their own weather systems. Ute Mountain and San Antonio are both free-standing, that rise to over 10,000 feet above sea level. On the plateau, they are unmistakable.  Thanks for looking. G 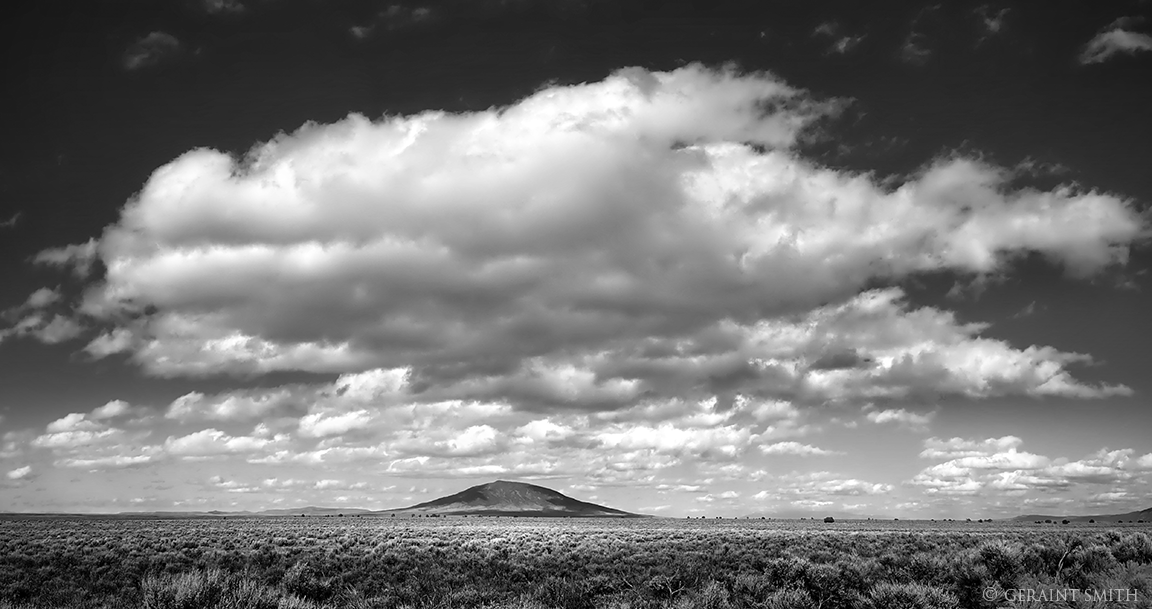 San Jose de Gracia de Las Trampas, on the High Road to Taos, NM. On a little safari today, we stopped at the mission church and set up to photograph the adobe building with the fast-moving clouds. We spent a few hours in the location waiting as the clouds built and disappeared before our eyes, only to billow up again and vanish once more. Eventually, they returned and became thick, heavy storm clouds and the cold drove us back to Dixon on the Rio Embudo for coffee and snacks. Thanks for looking. G 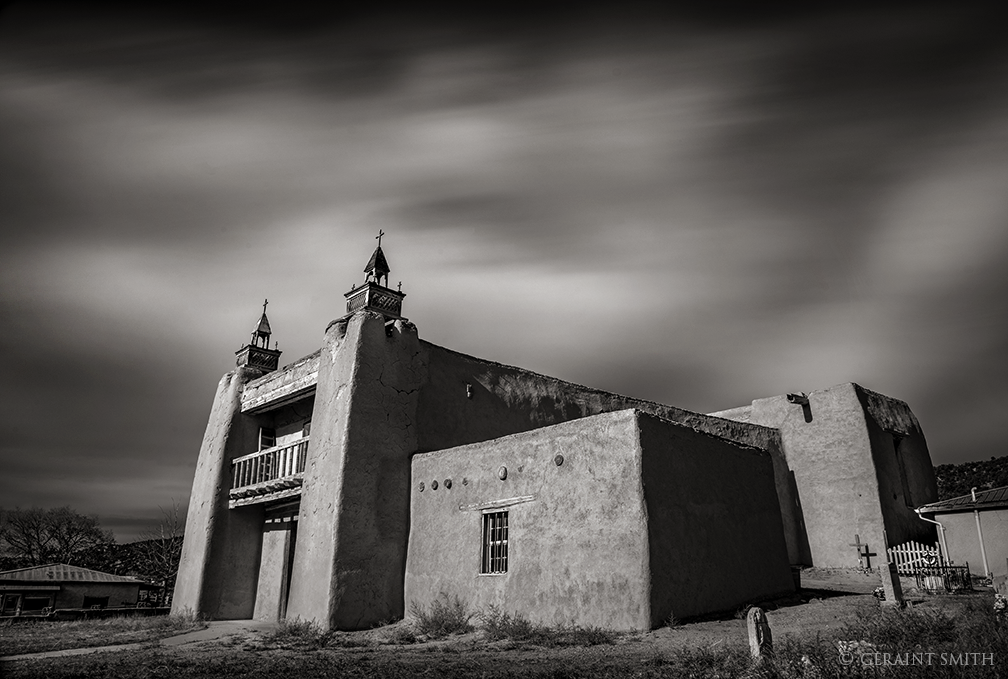 San Antonio Church, Valdez, New Mexico. Back to gorgeous skies and quintessential New Mexico scenes. The little village (would be more of a hamlet in Britain), and the church of San Antonio, nestled in the valley along the banks of the Rio Hondo. So much subject matter here in this area lends itself to black and white photography. Thanks for looking. G 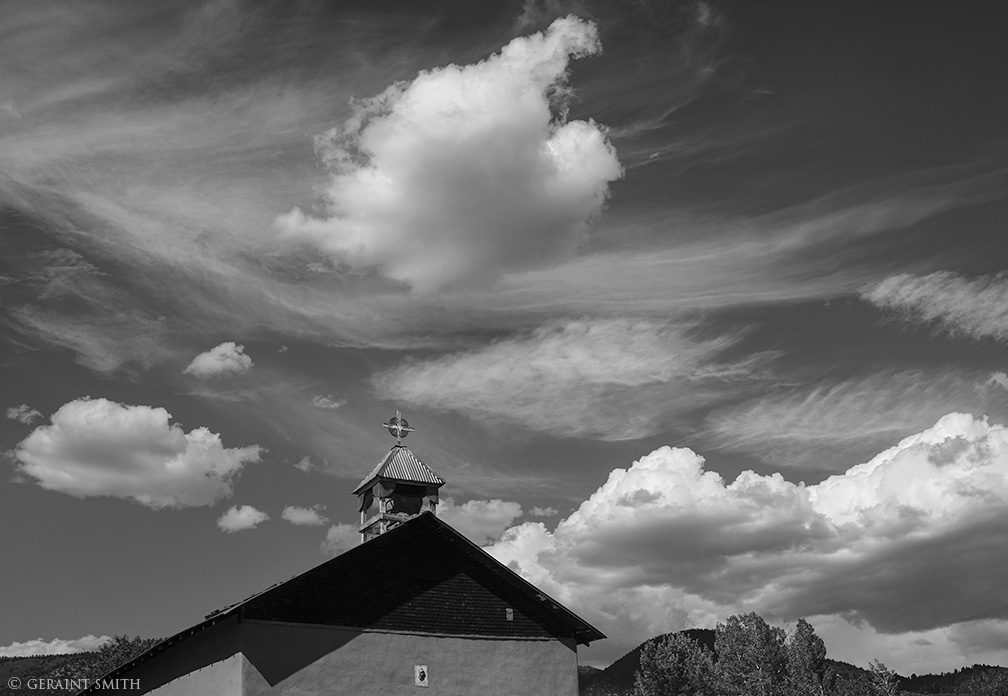 Northern New Mexico, one epic evening sky. In celebration of my fifteen year anniversary of posting one photo every day since September 9, 2005. I started my website with a rainbow so I thought I post a rainbow, with walking rain (virga) followed literally by the most amazing sunset a few days ago. Today we have snow and cold temperatures, so I stayed in all day. My website is my visual journal, I visit often. Thank you for joining me all these years. Onward! G 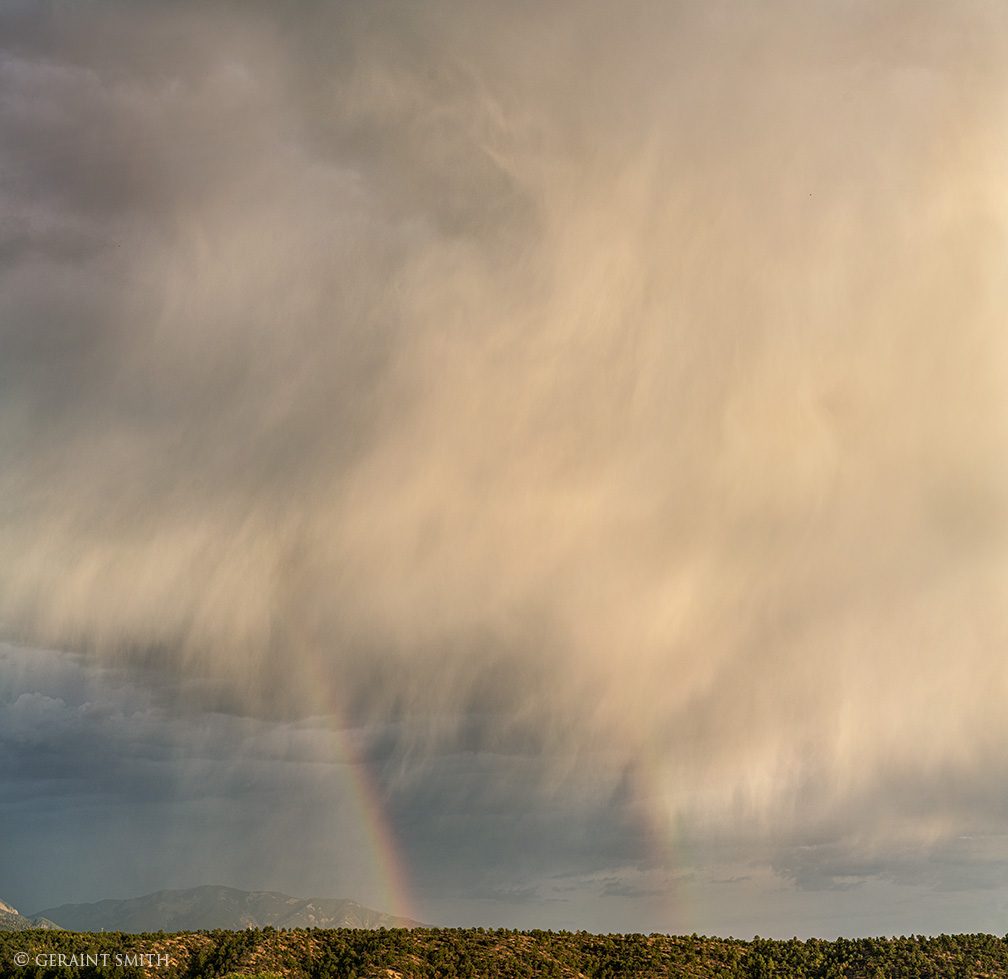 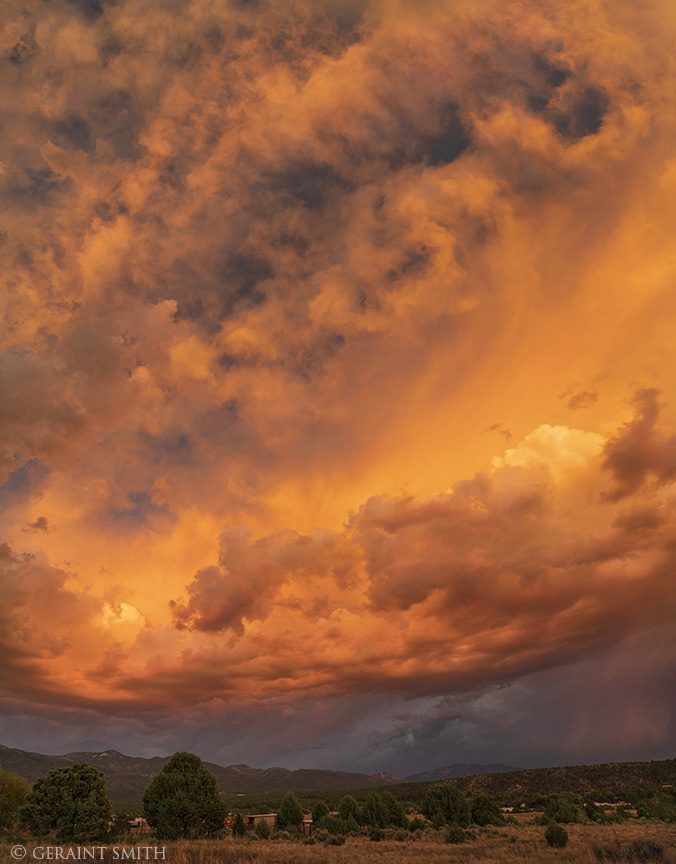 Mitten, Monument Valley Navajo Tribal Park, Arizona. Still digging in the archives, this one from last year on a ten day trip around the four corners. The last minute flash of light on the buttes, in particular the left mitten, with the dancing cloud, a nice added bonus. Thanks for looking. G 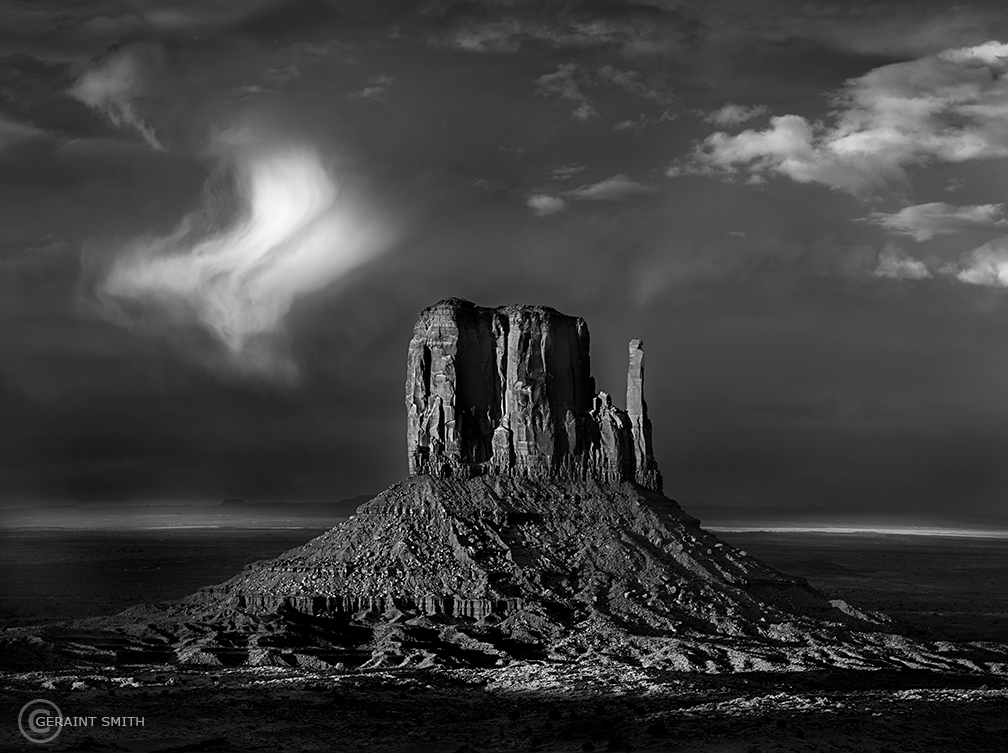