Greetings from the beautiful San Cristobal and Arroyo Hondo Valleys this week. We have virga skies and verdant pastures following this year’s early monsoon season.

The rain stopped briefly after raining straight for 48 hours. The sun came out for a moment before it began again. I hadn’t been out very much over the last two weeks. Drawn by the light, I grabbed my camera and headed out. I shot this first image of the virga rain from the driveway of our house.

Within a few minutes after the first image, I hopped in the car and drove south towards Taos, where I would have access to a turnout and views across the Taos Plateau and the walking rain. You won’t find much about walking rain online, but the rain here looks like it is out for a stroll as it passes across the plateau west of Taos.

A little farther south is the beautiful Arroyo Hondo Valley. As I descended the hill and rounded the curve, this scene appeared. I stayed here for about fifteen minutes before heading home.

Sometimes all it takes is a brief moment outside to clear my head, watch the storms pass, and nature putting on a beautiful show.

Within an hour, it was raining again, a torrential downpour with hail hammering on the tin roof and skylights. Lightning and thunder pursued, giving our old dog the tremors. A cheese treat with a cracker cured it. We woke up this morning to clear skies and more rain in the forecast. I’m in no way complaining here about the moisture we need it. See how green the landscape is, compared to a week ago.

This week’s final image is of the garden Buddha surrounded by marigolds Pami planted. I made a double exposure, one of the buddha and the other to blur the marigolds. The garden is loving the rain. It reminds me of Wales. Except in Wales, it would be raining for three weeks.

As always, thank you so much for looking. Stay well, and I’ll see you here next week. G

Comet/2020 F3 NEOWISE, northwest of Taos over the Volcanic Field/Plateau. When you see it, it’s hard to un see, until that is, when it vanishes into the clouds. Yesterday evening the fully overcast skies cleared a little, so I drove a few miles up into the hills behind the house for this view. The second image is when it emerged from the clouds setting over Cerro Chiflo, an old volcano. Thanks for looking. G 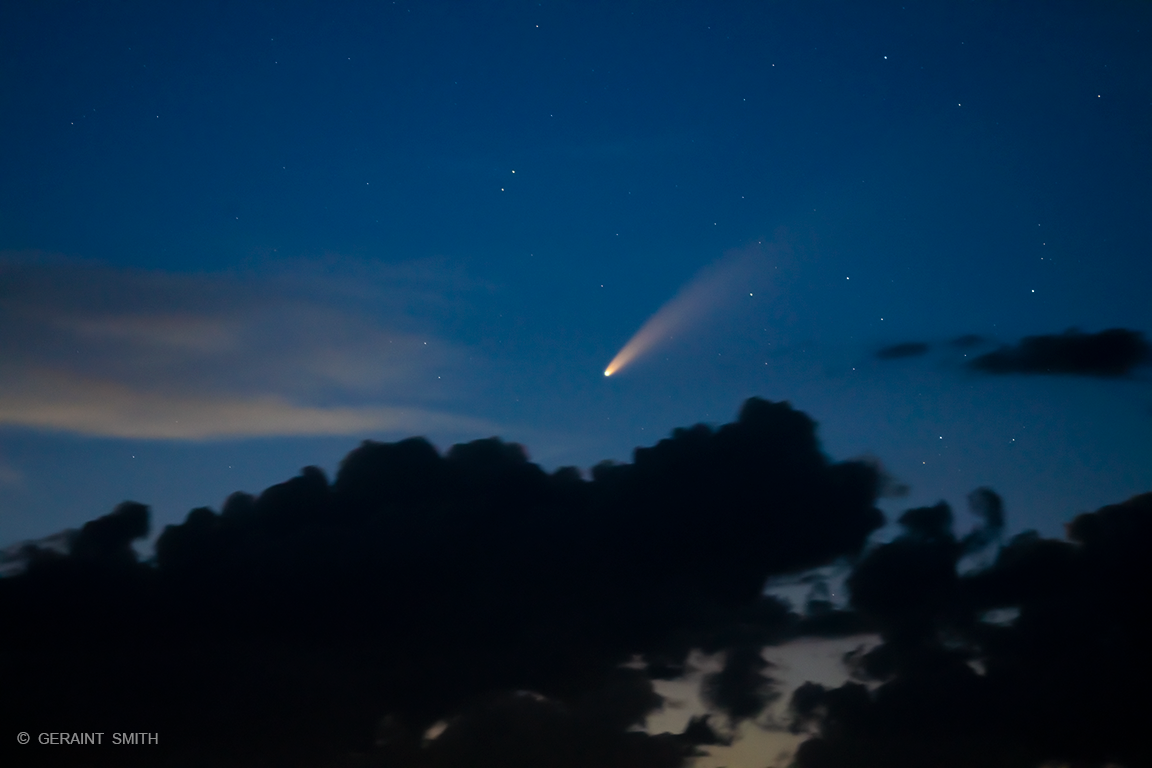 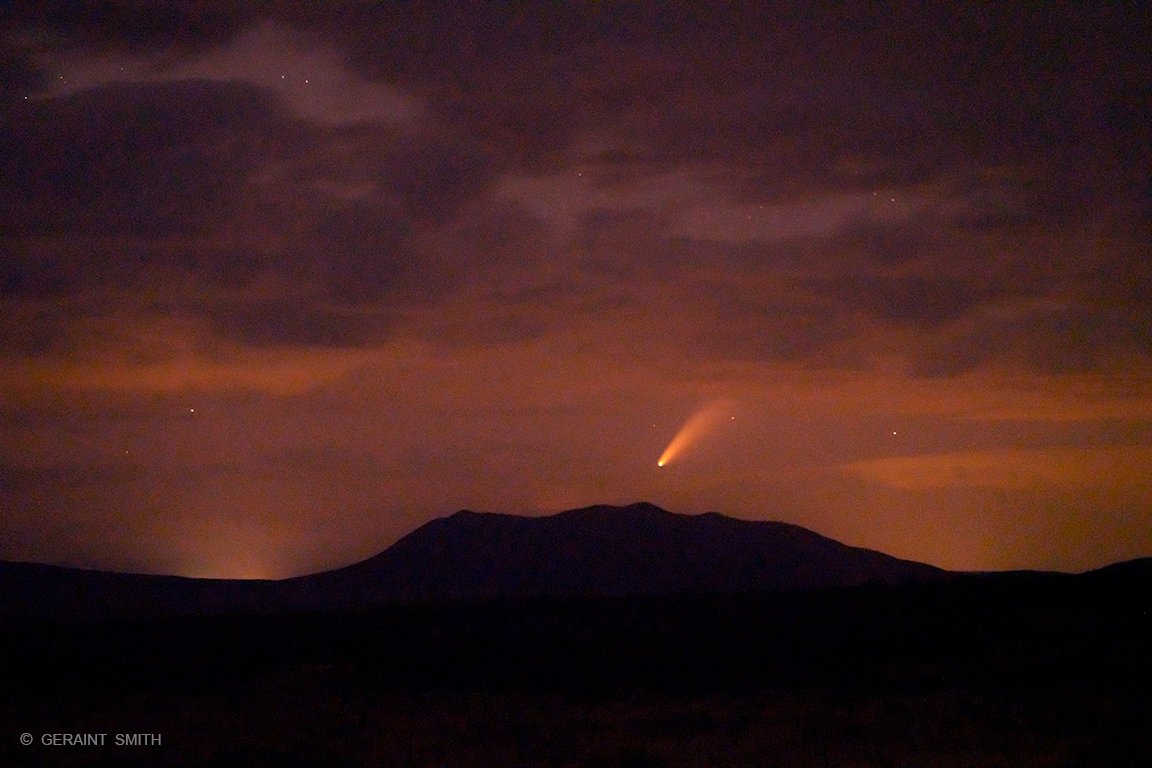 Crescent Moon, Venus, sunset sky across the volcanic plateau this evening. I took a drive out south to sit and watch the Moon and Venus set. I did a about an hour sitting and watching from different locations, and of course, a few minutes photographing. Thanks for looking. G 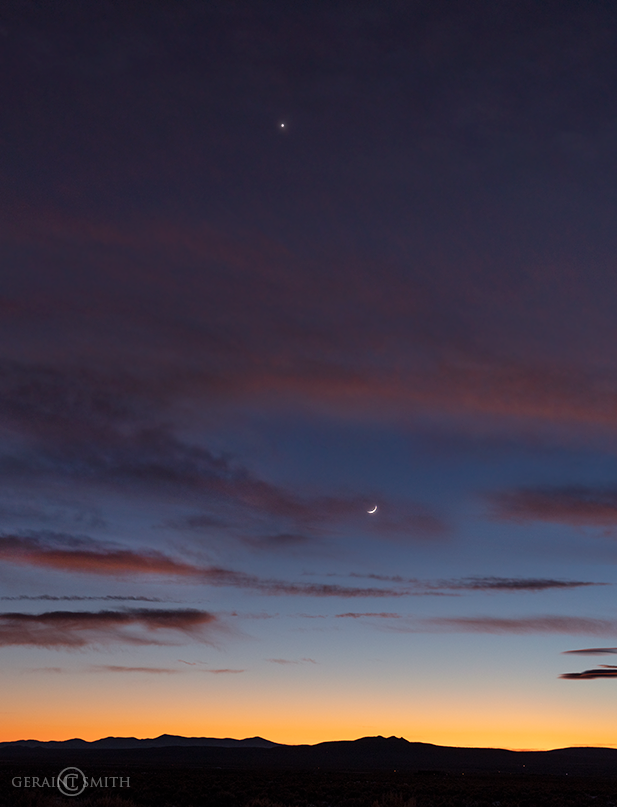 Wild Mustang, on the Wild Horse Mesa, in southern Colorado. There are many bands of these wonderful creatures roaming high up on the mesa with fourteen thousand foot peaks as a backdrop. To the west, there are many more wild horses on the volcanic plateau. Let me know if you are interested in photographing wild mustang and I’ll arrange it. Thanks for looking. G 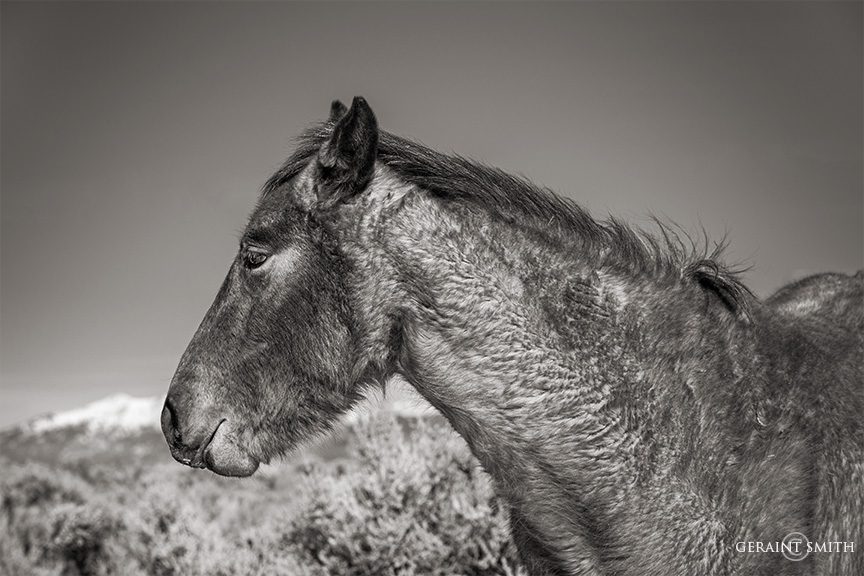 Morning Moon, Under The Elm Tree.

Morning moon today, under the Elm tree in San Cristobal, NM. Further west of the elm lies the volcanic plateau where the moon will vanish beyond ancient, extinct volcanoes and cinder cones. Thanks for looking. G 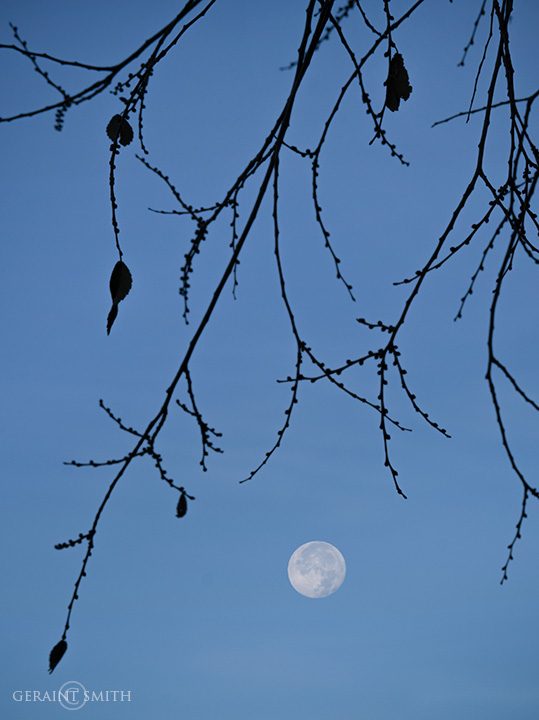 Crescent Moon, setting over the Taos Volcanic Plateau, northern New Mexico. It was very quiet out there as the moon emerged briefly in the space between the clouds. No traffic, no birds, no planes… and then it disappeared into the clouds again. Thanks for looking. G 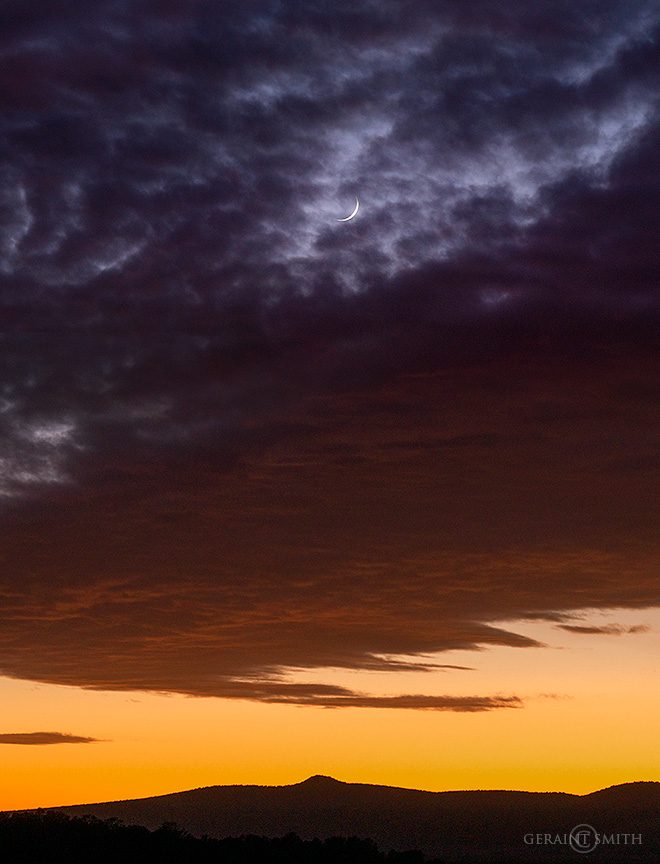 Mesa light rays breaking through. The landscape is actually a plateau but locally we all refer to it as “the mesa”. When I was driving home a few weeks ago, I just had to pull over for this one and to watch the show. Believe it or not, there is lightning in the bright spot center right. I was reviewing images today and came across this one, so I thought it time for a dramatic landscape photo. Thanks for looking. G

Storm cell over the Rio Grande Gorge across the volcanic plateau. They move fast and drop a vast amount of water in a very short time. The cell expanded toward me, fully engulfing the little valley and me. I managed to keep the camera covered and dove back into the car out of the rain and lightning. Thanks for looking. G 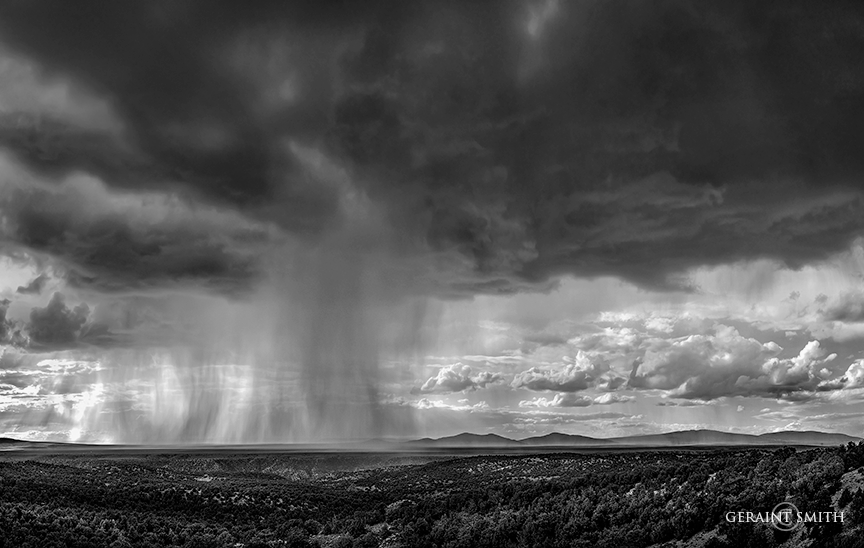 Corral on the Volcanic Plateau, northern New Mexico. Made a drive today with my good friend and photographer R. David Marks. We scoped out some familiar locations and some new ones. It was another good day out on the road making images. Thanks for looking. G 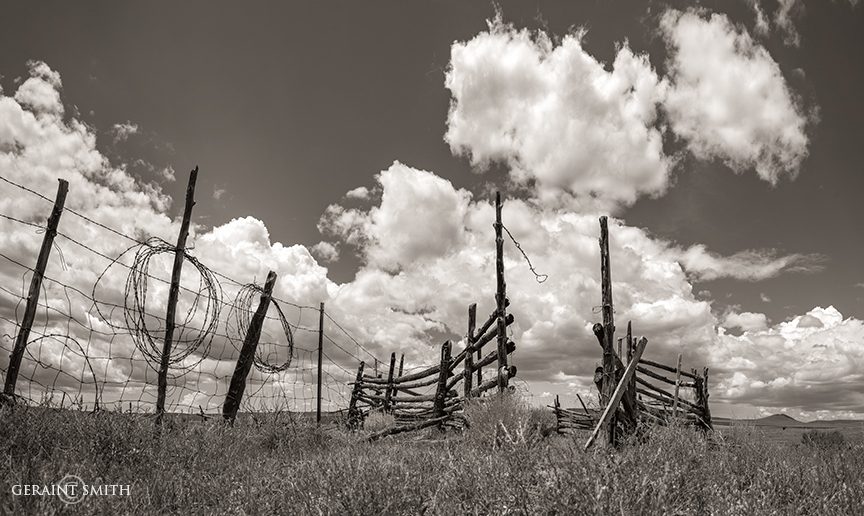 Winter Corral Fence, On The Plateau

Winter corral fence, on the Taos Plateau. A quick flash back to a place I stopped in at a dozen times this winter near San Antonio Mountain. Not the biggest snow fall but one of the prettiest. Thanks for looking. G 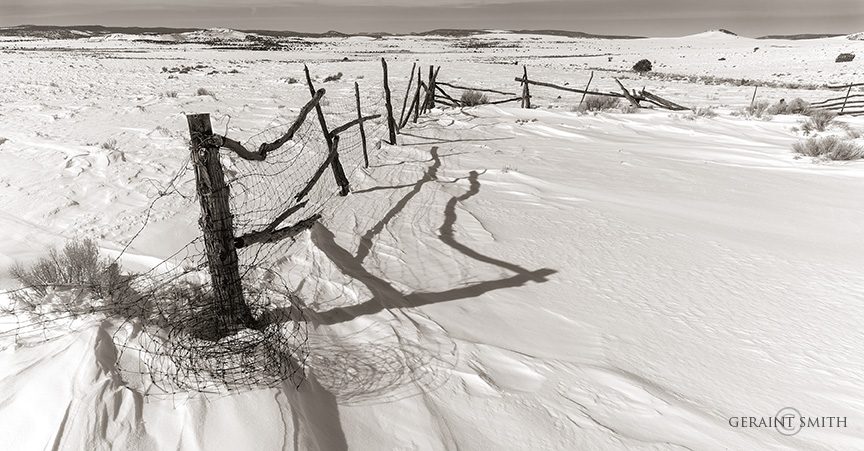