Things I’ve seen and done in the last couple of weeks.

I’m continually reviewing images from previous weeks and months. The following images are from the last couple of weeks. Some from the front field and some from trips out in the greater field. I’ve also included an image of my daughter pulled from way back in 2004 that I’ve re-worked for printing. And lastly, a little something from 2005 for this weekend’s happy hearts day.

I begin with the most recent from yesterday morning with this month’s waning moon rising over Taos Mountain.

The following are a couple of images from a drive Pami and I did into the San Luis Valley the last time it snowed.

Last week Chris Ferguson and I drove south to Carson, NM for a photoshoot on the Rio Grande Gorge Rim. We had some beautiful winter sunlight in the late afternoon to create another set of old west inspired images. Stay tuned for a few more from the last couple of these commercial shoots I’ve collaborated on with Chris, at Tres Estrellas.

A rather dense sunset last week on the way home from the Cellar, our local bottle shop. Not the color of fine red wine as is often the case with the Sangre de Cristos. Despite the heaviness, this sunset got a lot of attention from locals judging by the number of posts on Facebook.

My daughter, taken back in fall 2004 in Taos, New Mexico. If she could get into or under anything she would. I reworked this image in order to make a print I’ve wanted to hang.

And lastly, something appropriate for this weekend. Fly me to the moon in a valentine balloon.

As always, thank you for looking.

Venus and a waning crescent Moon rising over the Sangre De Cristo Mountains, northern New Mexico. I got out there early this morning, but only as far as the driveway. That’s as far as was needed. The silence was palpable save the crunching snow underfoot, and as is the case it got the coldest right before dawn and the frost built up thick on my tripod. The neighbor’s dog stirred up a couple of other hounds in the ‘hood. Happily, I was done by then and only had to walk a hundred feet to a steaming pot of tea, toast, and marmalade. Thanks for looking. G 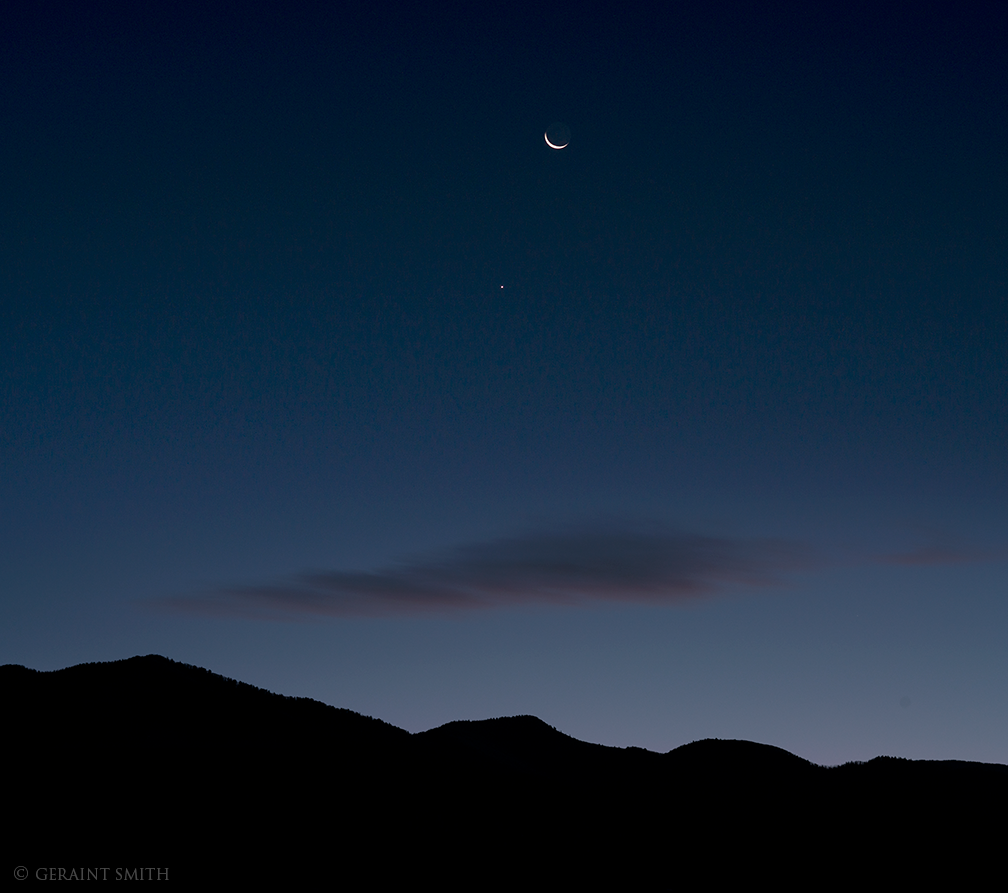 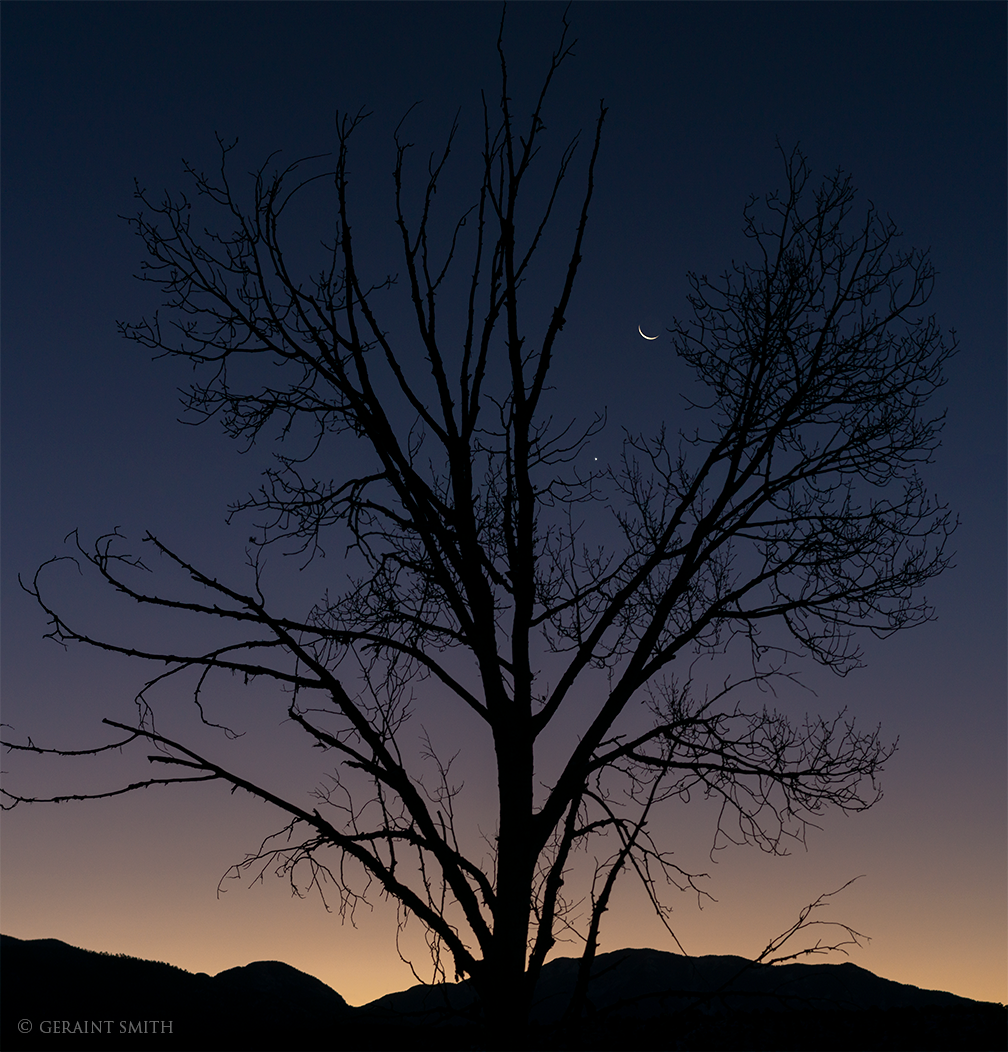 Saturn, Jupiter, with three of its moons, and our Moon. The first photo is a wider view of the arrangement and the second photo is a glimpse of Jupiter and three moons. I hope you can get a look at Jupiter the, brightest light in a generally southwest direction. The moons are visible with a pair of binoculars and good eyesight. Not with my eyes, I need the help of a digital camera. Thanks for looking. G 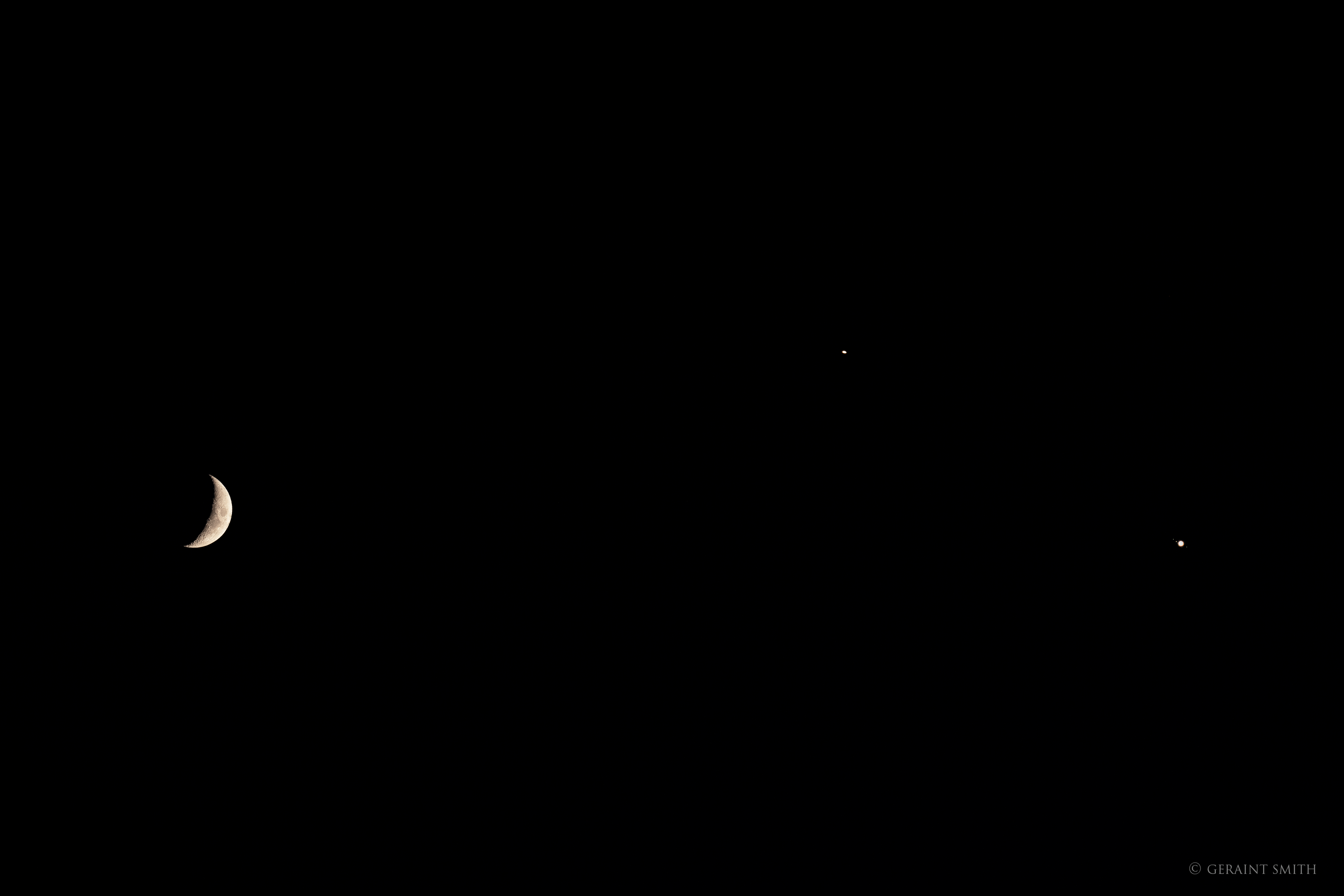 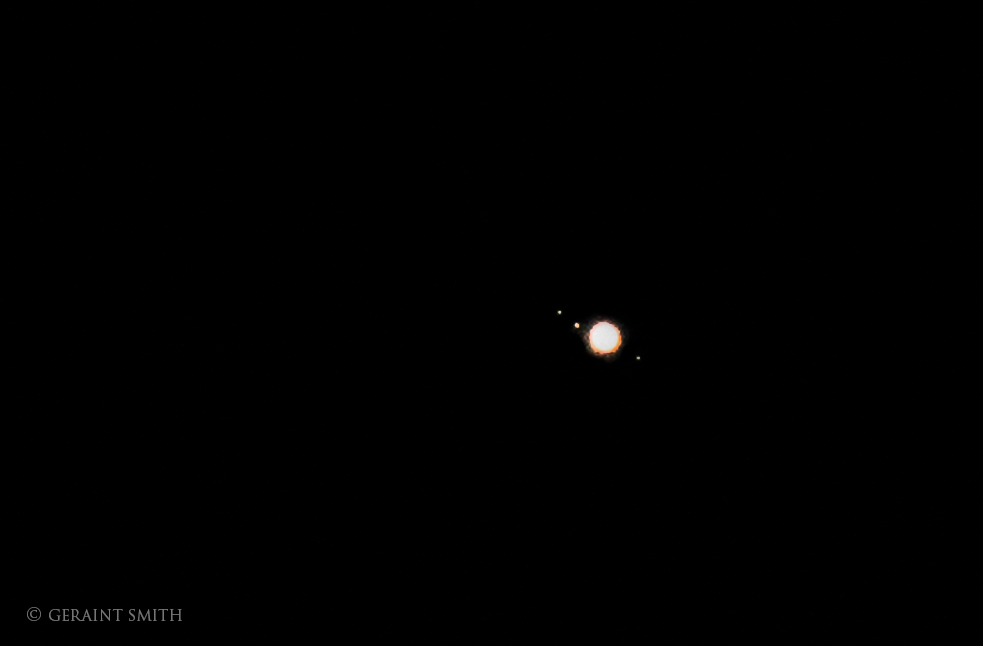 Three Peaks, the Jemez Mountains, a Crescent Moon, in a Sunset. I stepped outside for an hour to watch the moon set across the plateau over Three Peaks (Tres Orejas), and the Jemez Mountains a supervolcano. The moon and sky were bathed in the golden afterglow from the sunset. Thanks for looking. G 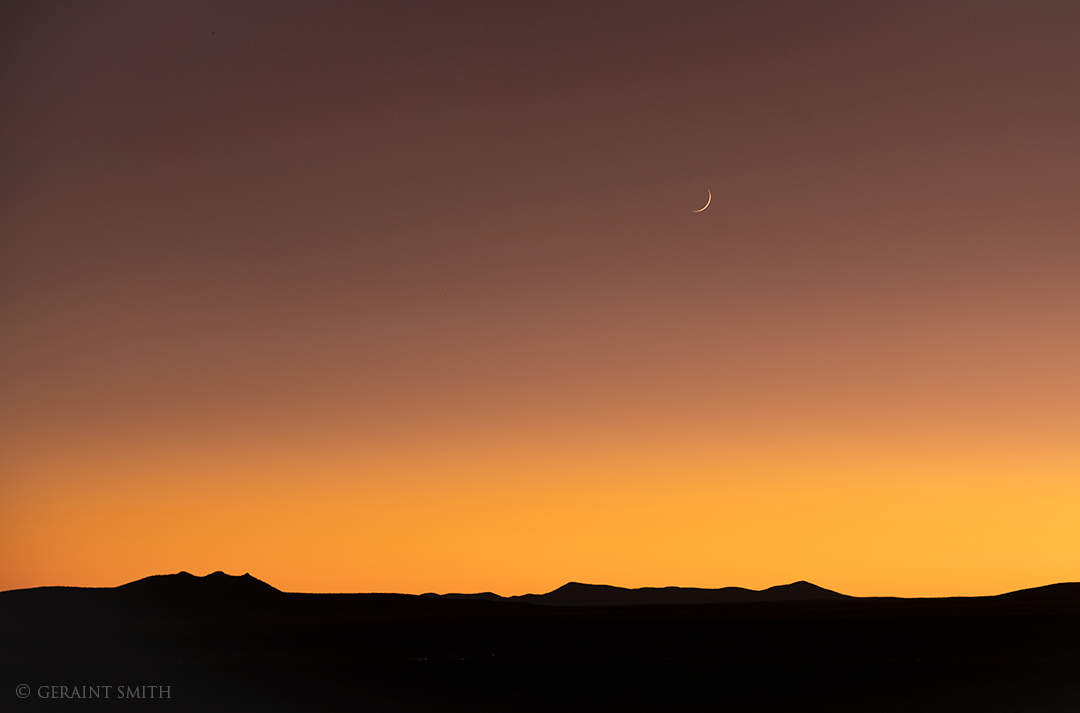 Venus, Spica, Crescent Moon, Mercury, Taos Valley lights spread along the base of the Sangre de Cristo Mountains, capped off with a slightly dense sunrise. This morning was a little colder than yesterday but I was prepared. Tea and a sandwich, thick gloves with figure tip access, and hand warmers. Yes! Then this view. I’m enjoying being the one on the road not in a hurry to get to work. New Mexico is in a two-week strict lockdown again. Not a problem. I’m ready to hibernate anyway. Thanks for looking. G 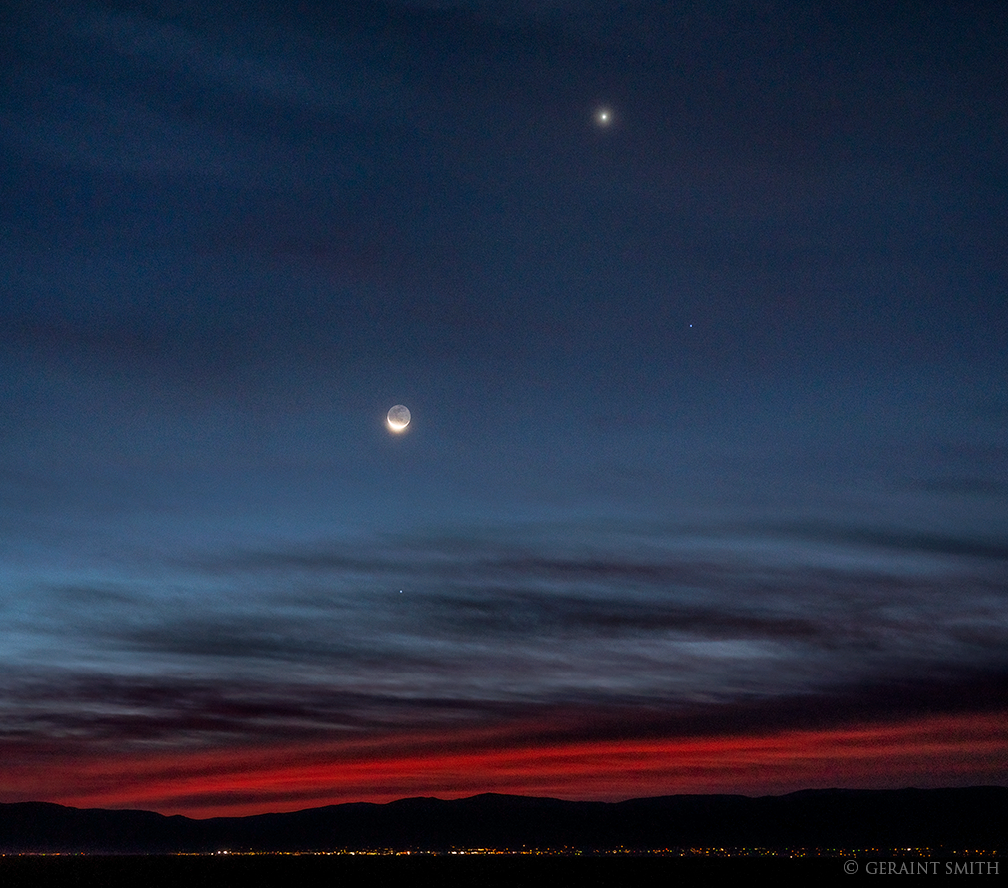 Mercury, Spica, Venus, Crescent Moon, Arcturus, Taos Mountain, and the Sangre de Cristo foothills. Mercury, last to rise, Spica at one o’clock, Venus next with her escort, the moon. Arcturus is out there in left field. It was a crisp cold clear morning that started on the deck at 4:30 am with a meteor fireball directly overhead that elicited a loud gasp from me. It came out of the Pleiades in the constellation Taurus, passed directly in front of Orion’s belt and beyond until it fizzled out in a smokey stream. Then, a 30-minute drive to the Rio Grande Gorge for this expansive view of the Taos Valley. I’m pulling out the hand warmers when I’m out there tomorrow morning. The crescent will be further east nearer to Mercury. Thanks for looking. G 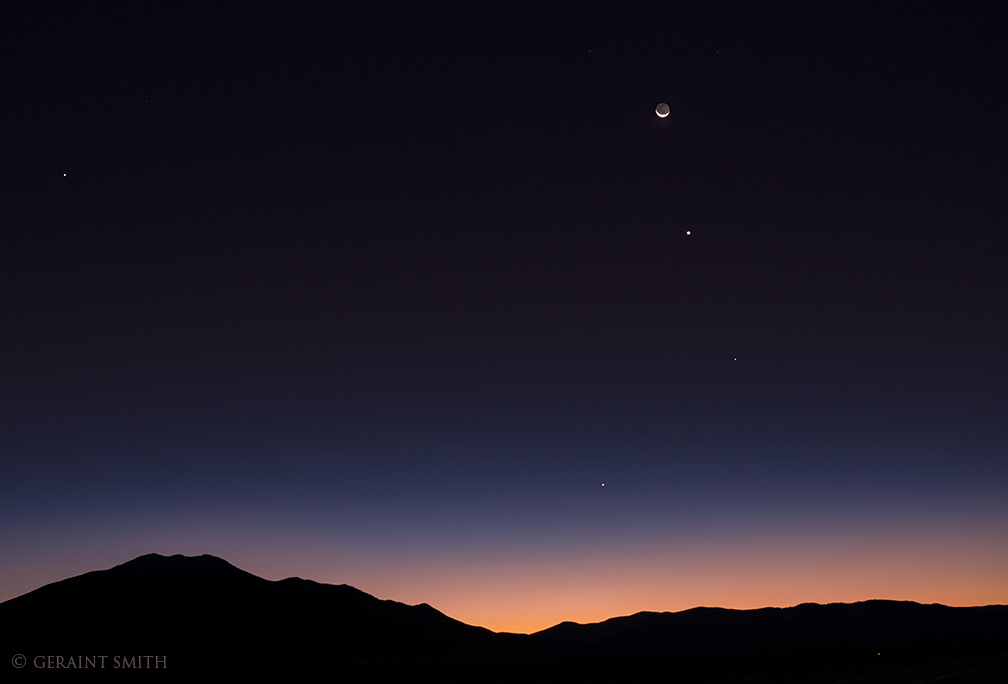 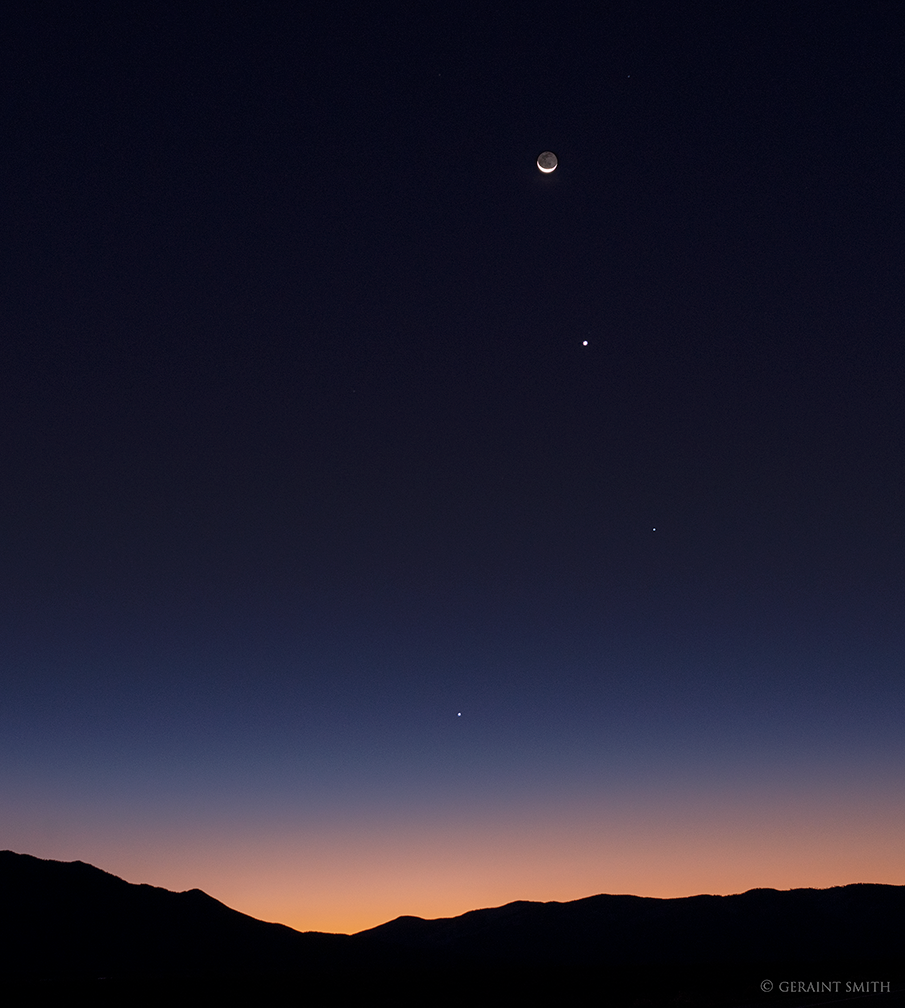 Ute Mountain with the red barn and crescent moon in the San Luis Valley, Colorado. I headed north to the state line and into Colorado yesterday evening. The sun and moon were setting as I drove forty-five minutes for a shoot at the dilapidated barn. Flocks of crows went where ever crows go at night and owls took up their nightly vigil in the cottonwood snags. The holes in the barn let the dusk and moonlight in. A few stray critters dodged my tires as I ran over their tracks in the twilight. Thanks for looking. G 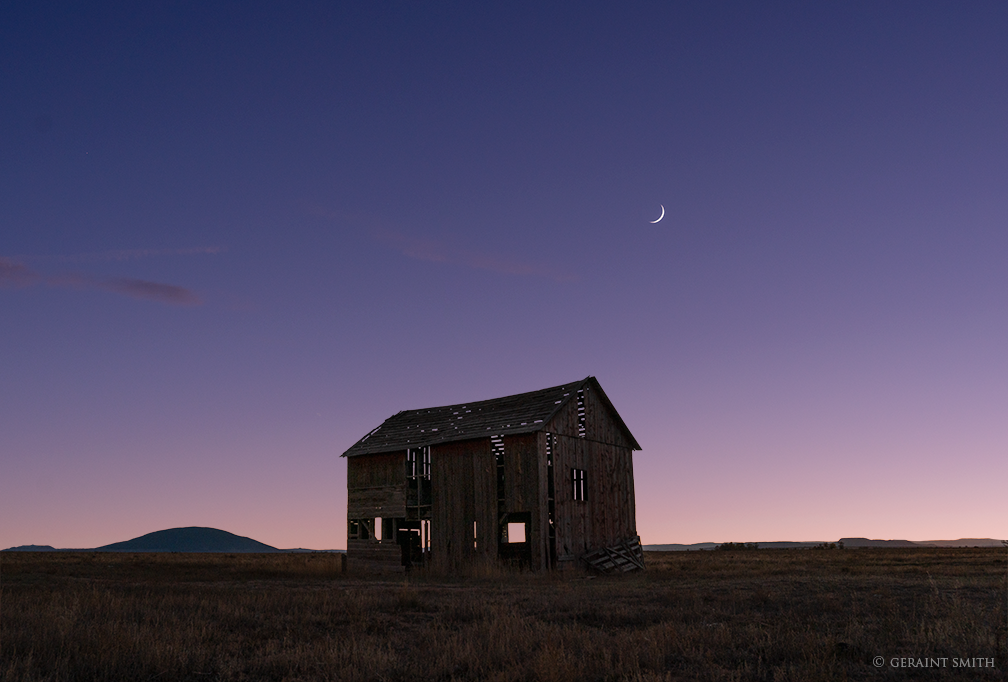 Waxing Crescent Moon, over the Taos Plateau, Volcanic Field. It’s been a while since I’ve caught a 1% crescent moon waxing in the west due to clouds and constant fire smoke this year. Last evening was a special treat and beautiful to behold. Thanks for looking. G 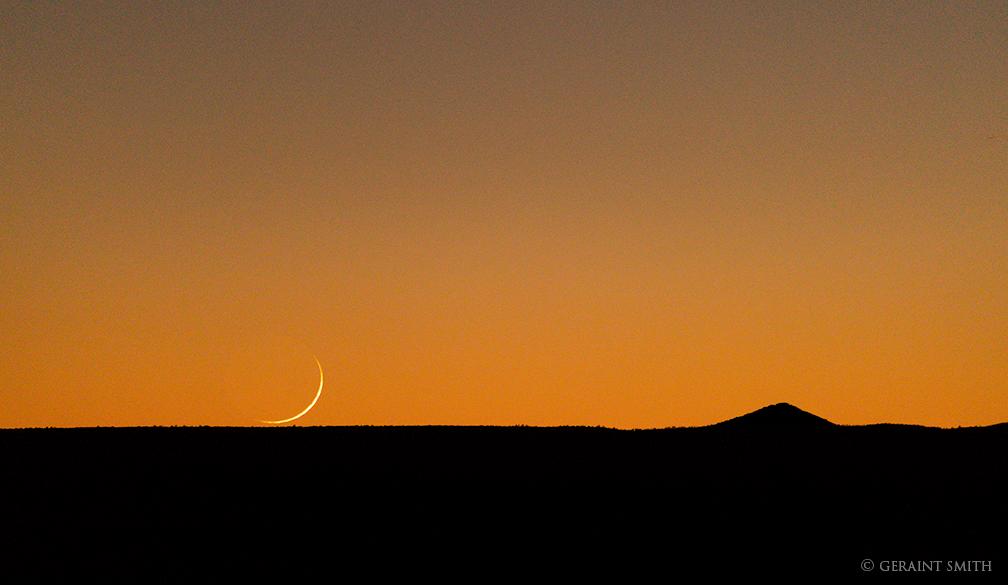 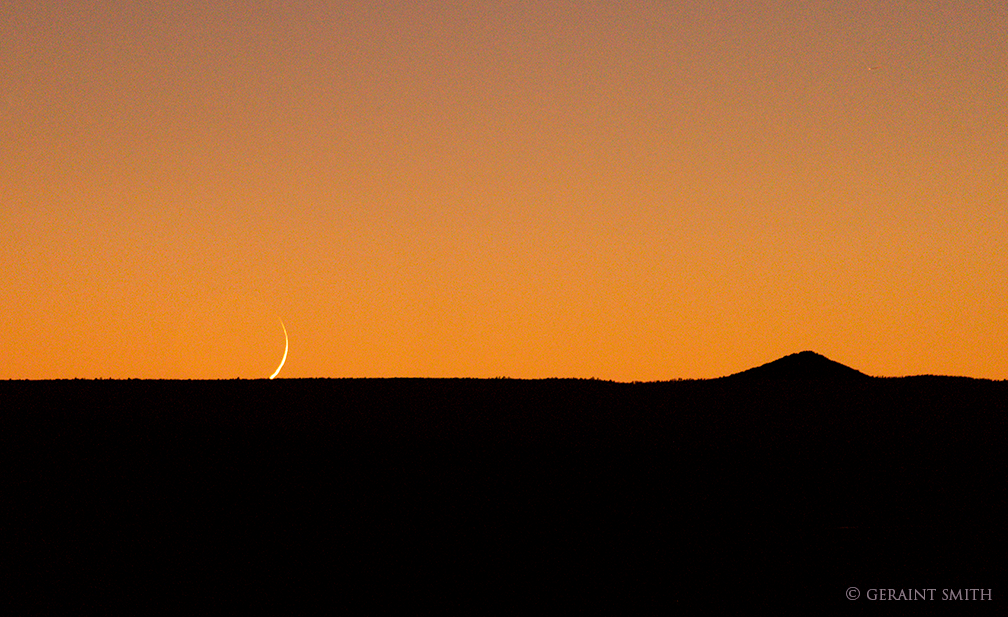 Waning Crescent Moon, Sangre De Cristos, New Mexico. The silence awash across the valley when La Luna rose over the mountains was palpable. No dogs, roosters, coyotes, or birds, and the camera on silent mode perpetuated the peace in this moment. Thanks for looking. G 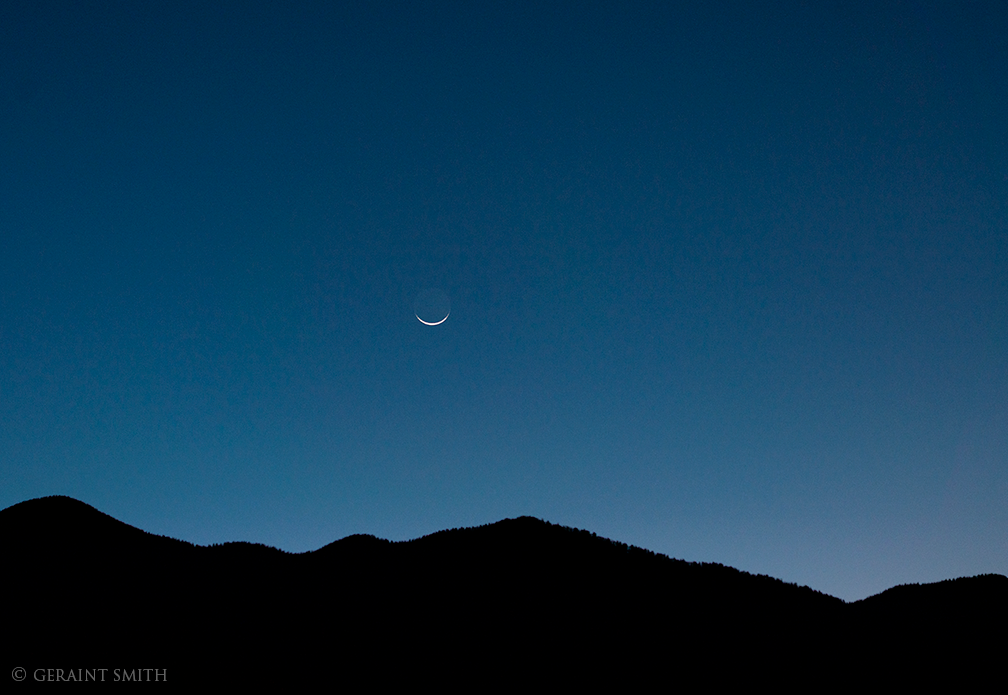 Crescent moon and cloud in a mauve sky. Hanging over the plateau yesterday evening. I look in the direction where I know the moon should be, but it is lost in a bright sky. I strain my eyes, I know it is there, then… without further ado, there it is! Thanks for looking too. G 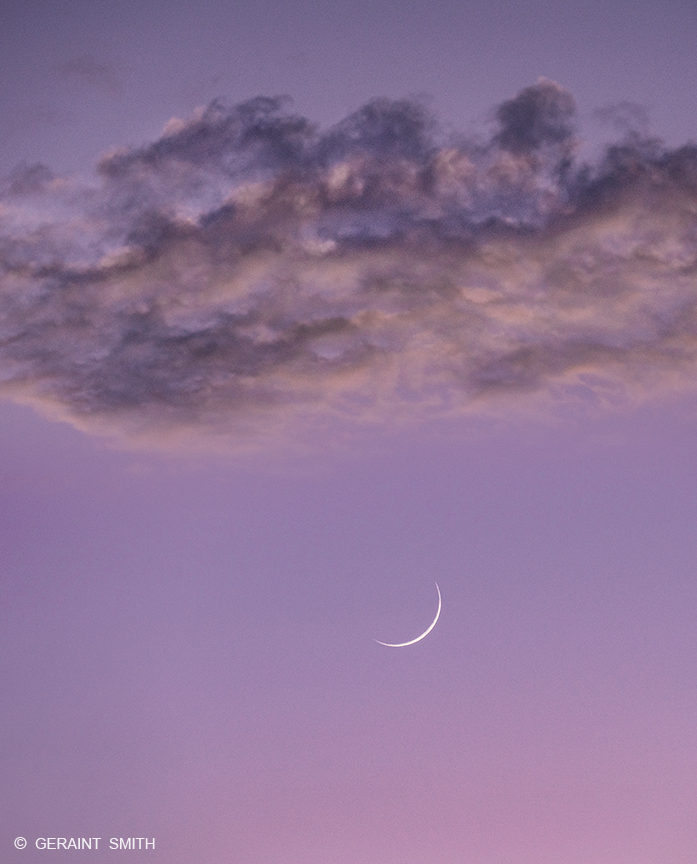