Down, at the Saint Francis Church. Up, with Red-tailed Hawks

I was on a photo tour last week demonstrating with a photography client the benefits of looking down and how it can often pay off with a rewarding image. In this case, looking down in a puddle on the flagstones, we captured a really nice reflection of the iconic San Francisco de Asis Church in Ranchos de Taos. Of course, it helped that one of the parishioners was hosing down the walkway, and I’ve shot this type of scene, many times.

Yesterday, I went up north for a short drive scouting some locations for an upcoming workshop happening for the next three days. I drove on a back road I’m very familiar with and found a male and female Red-tailed Hawk with their juvenile fledgling. The male was off on a power line pole to the east, the female and the chick were on a pole further west with a half-eaten rabbit. In the second image, you can see the nictitating membrane in the eyes of the mama and the young one as they both blinked simultaneously. This membrane allows birds to blink and clean the eyeball while still being able to see what is afoot. Here is a link to the nictitating membrane or “third eyelid”.

A little bit of This and That, this week.

I made this image of the ubiquitous blue window and shutters with hollyhocks in Ranchos de Taos. Hollyhocks are in abundance all around Taos this summer including the grounds of the famous St. Francis Church across the street from this scene.

We made a hike to the waterfall and streams coursing through the Taos Ski Valley to check out the wildflowers. Not a very long hike either. This little grouping of columbine come back every year in the same spot. You can probably find a similar image from a previous year on my website.

We stopped in Ghost Ranch last week and saw that bits and bobs of a movie set were still standing. They’d even moved a dead tree that had fallen down a few years ago elsewhere to the middle of the set. (Thank you Mark Collins for the inspiration). We opened the doors and went inside. The light streaming through the holes made it sort of magical in a way. Thanks to the movie makers also.

Last week I spent three days working with a client from New York during his month long cross country road trip. One of the days was spent in Abiquiu and the Rio Chama Valley chasing storms, followed by a day in the Rio Grande Gorge and along the High Road to Taos. Our final day was spent criss-crossing the San Luis Valley photographing abandoned farmhouses, barns and this old bridge.

The week ended back at home with a nice visual from the deck.

I hope you are enjoying winter. I know some of our neighbor states are getting weather they don’t normally experience. Stay safe and warm where you are. Here are some images from a trip around the extended neighborhood this week.

The first image may look familiar to many people as I stop here often in Arroyo Hondo on the drive to and from home and Taos.

The sun came out on the way home today and the landscape looked pristine. Here’s my favorite “stretch gate” and farm road.

A stretch gate in San Cristobal on my morning walk yesterday.

A view of the church in a location I’ve not shot before. The morning sunlight breaking through the clouds caught my eye from highway 68 which runs through Ranchos de Taos.

In San Cristobal this morning our garden Buddha wore his full snow blanket. The snow is still coming down as I write. We are warm and cozy with the wood stove filling the room with a golden glow as well as heat. From the sofa we can watch the snow falling all around the valley.

Thanks for looking and have a great week. G

Tipis south of Ranchos de Taos, New Mexico. I headed here first last night for the conjunction but the elements didn’t align. So I headed to the church shortly afterward. That worked out fine and print sales were brisk today. I did shoot some images at the tipis before heading to the church. I added the antique aged distressed look to the shot. Keep looking up! The planets are still passing in the night. Well, not really, Saturn is just under half a billion miles further out into space than mighty Jupiter. Thanks for looking. G 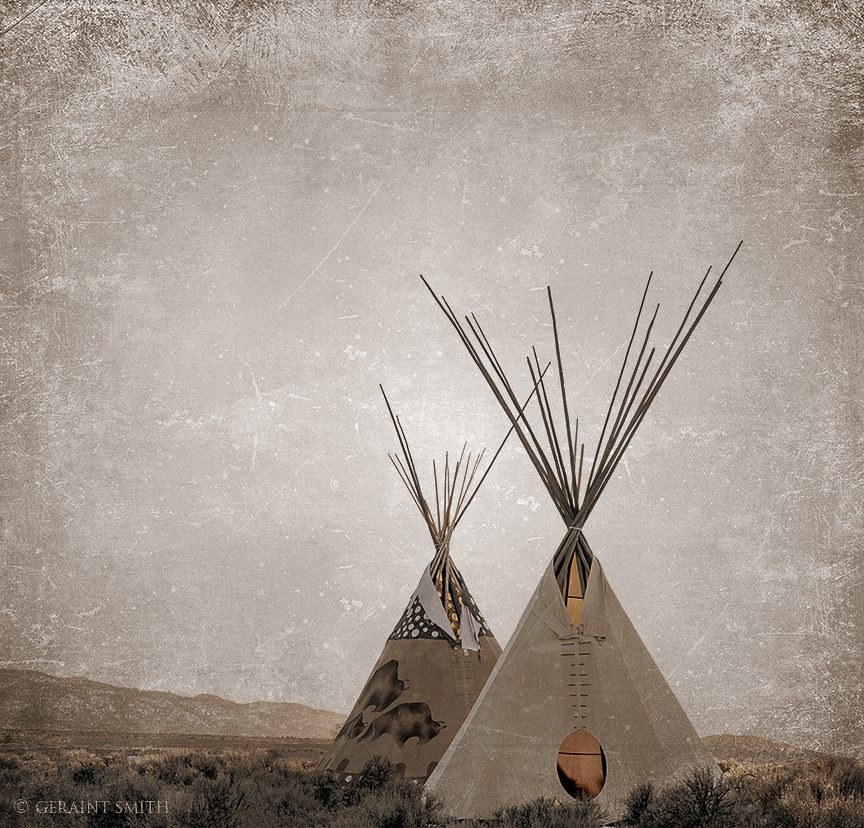 Saint Francis Church, Ranchos de Taos, with Saturn, Jupiter, Conjunction. Jupiter, four moons, and Saturn, a composite image, one focused on the church belfries and the second focused on the planets. Zoom in to see the planets. I hope you got to see it out there. Thanks for looking. G 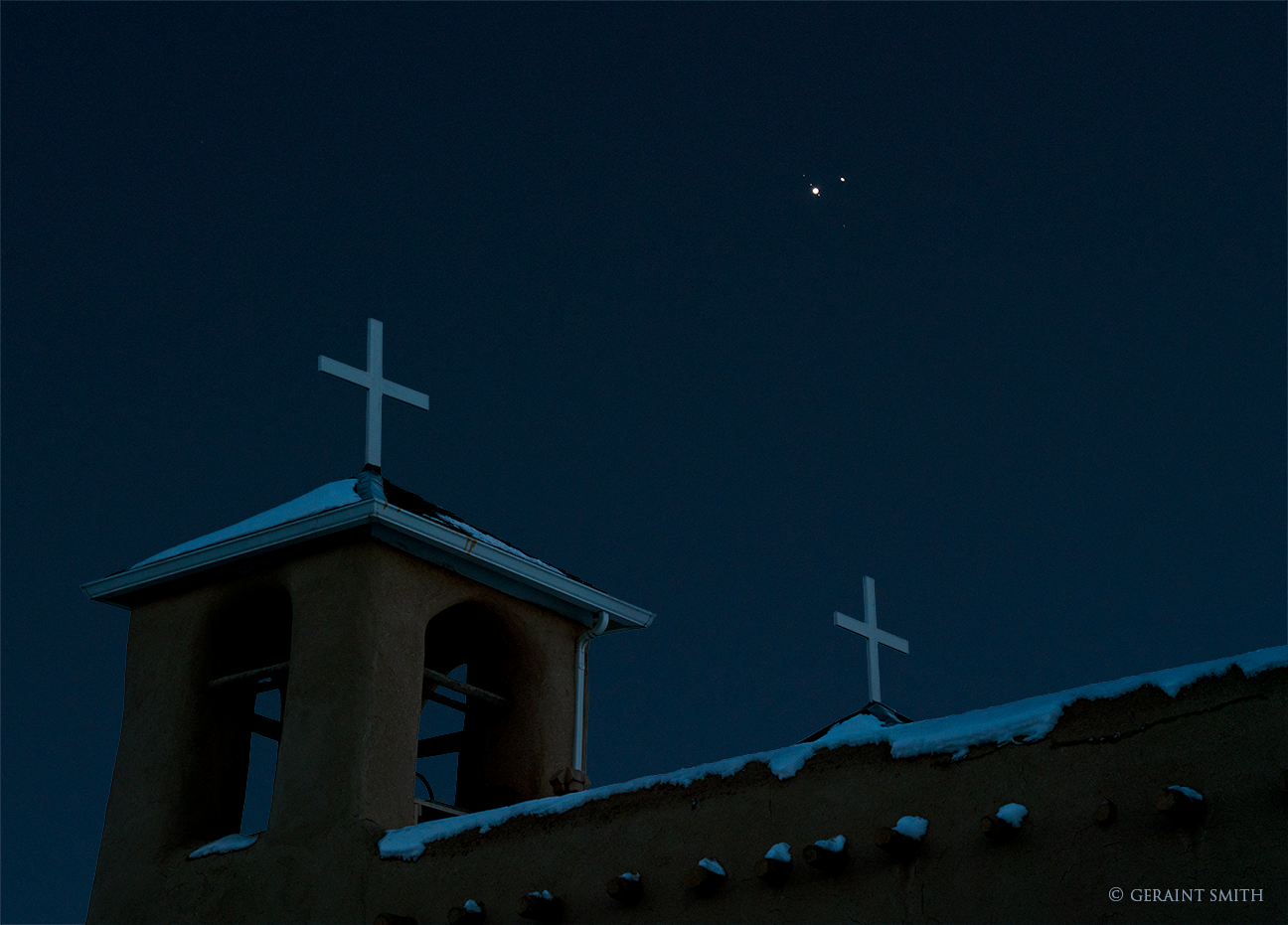 San Francisco de Asis, Moonrise, Ranchos de Taos, NM. Sometimes the elements come together where one would like them to. Photographed and painted by many artists, I never tire of another visit to this mission church south of Taos. A big plus when no one else is there. Can you feel the peace and solitude? Thanks for looking. G 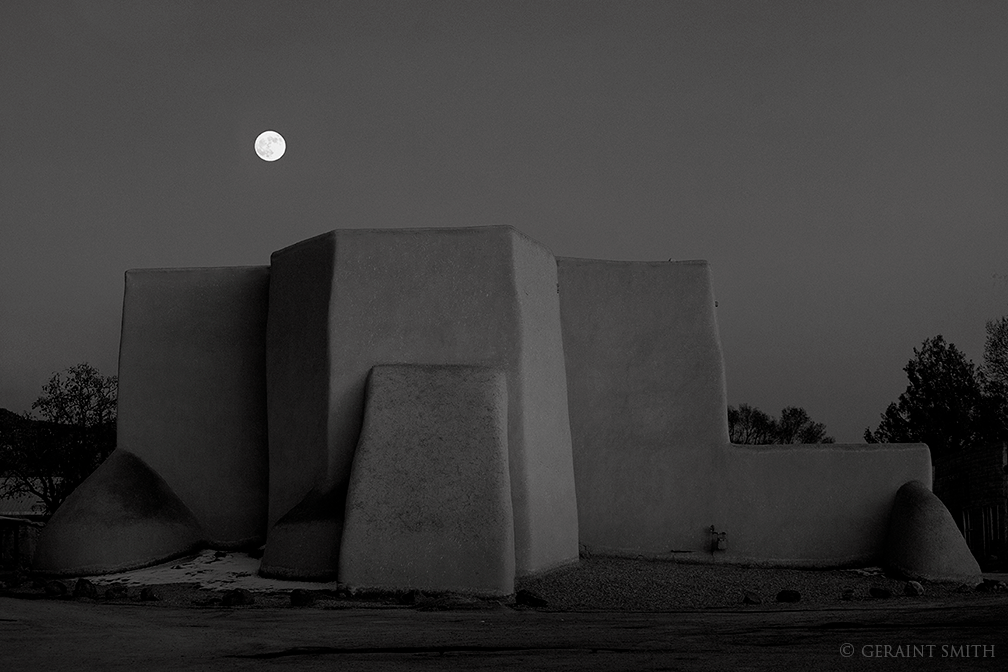 Raptor, Red-tailed Hawk on the road to Ranchos de Taos, NM. Alert and on point. Always. I love these creatures, their purposeful design, and immaculate bodies. Their haunting calls from the skies stir my body and soul and remind me there is no way to get back to nature… because we’ve never left it.  Thanks for looking. G 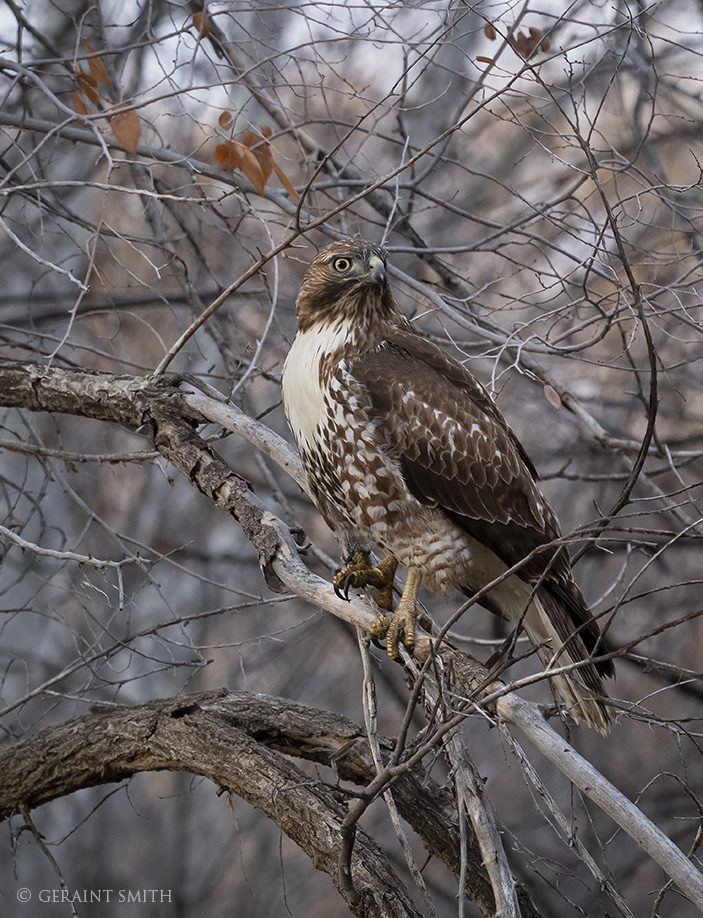 Red-tailed Hawk, Ranchos De Taos, New Mexico. I spent twenty minutes with this magnificent young raptor who spent the time primping and preening, grooming its feathers. I thought he was going to sit there all day. As I thought about driving off, he shook out his wings and tail feathers, had a quick poo, lifted off still pooing, and dropped out of sight. Thanks for looking. G 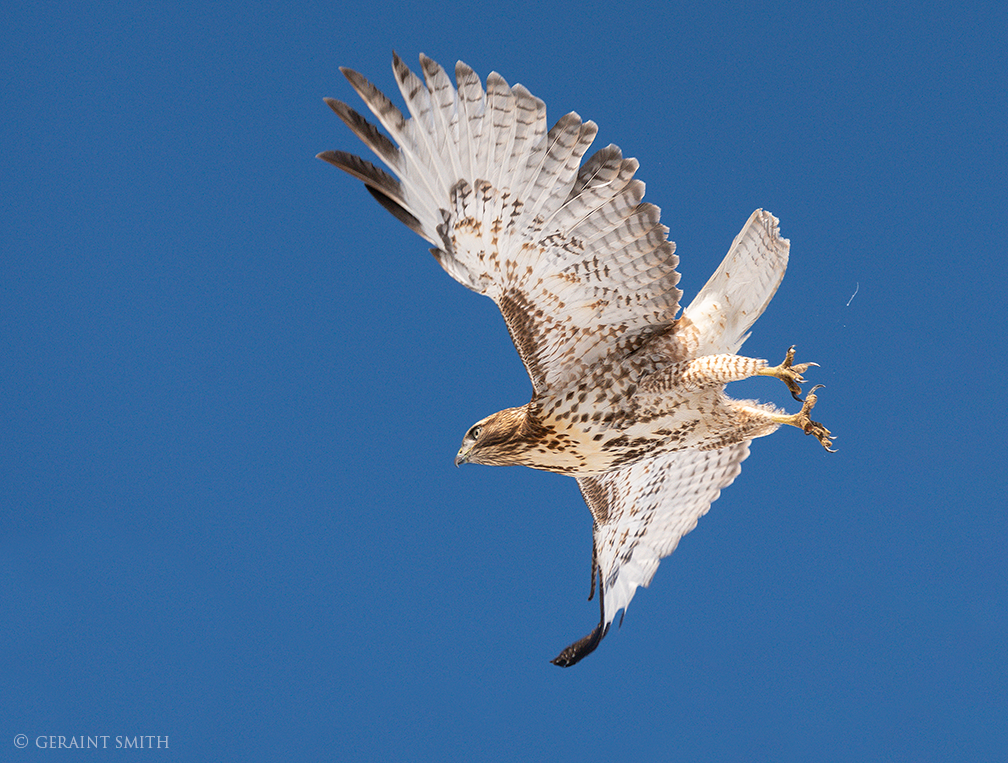 San Francisco de Asis Church, Ranchos de Taos, NM. This building sure puts on a show for black and white image-making. Not to say that radiant blue skies and sunlight bouncing off the warn adobe mud walls isn’t also beautiful. This is one of my favorite angles and compositions. Thanks for looking. G 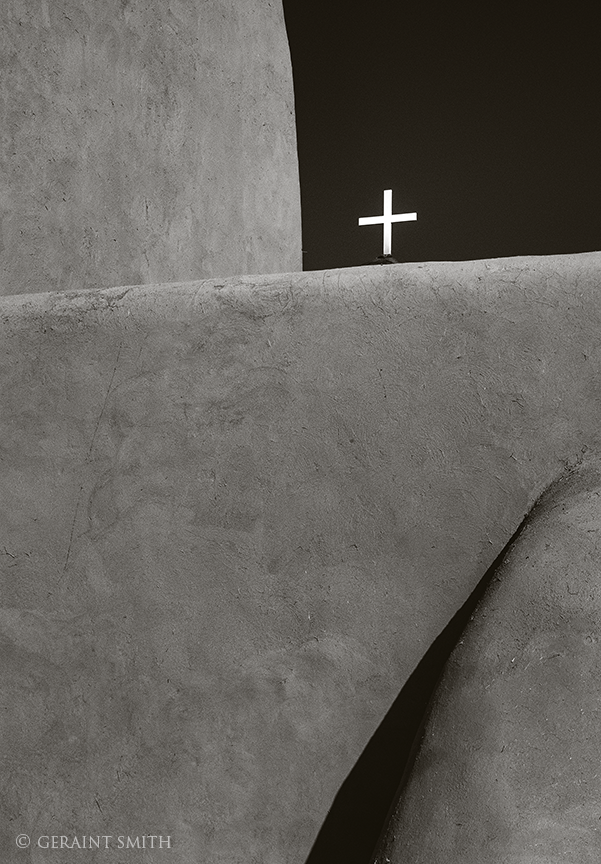 Saint Francis Church, Ranchos de Taos, NM. The San Francisco de Asis Church under a lavender, twilight sky. Soft shadows give this building a gentle look. From across the street you can also see one of the two belfry crosses. The two towers aren’t equal in height therefore only one cross is visible. Well they maybe equal, but the foundation slopes to the south making them uneven. Stay soft and gentle and be safe out there. Thanks for looking. G 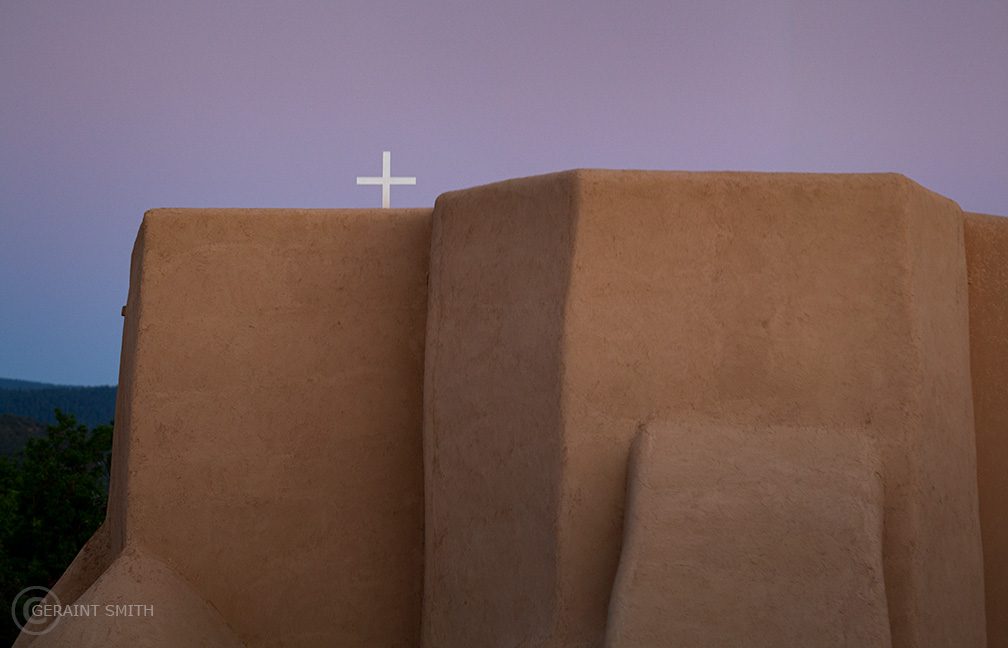